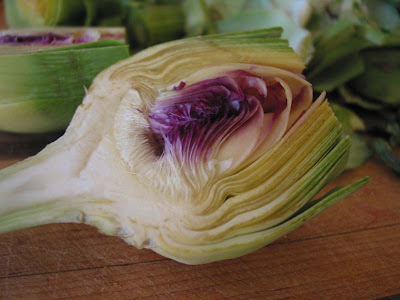 I have to make a confession. As much as I'd like to think I am a foodie, there are still a lot of foods I've never cooked for myself: Foie gras, creme brulee, gnochhi, and artichokes. When I saw the artichokes sitting amongst the organic imports at the market on Sunday I decided to do my own taste adventure. Sure, I've eaten my share of jarred artichoke hearts on pizza and pasta but I've never taken on the home cooking challenge of a fresh artichoke.

Artichokes are not at the peak of their season, and I knew that going in. But if I'd seen these California beauties in May I'm sure I would have had the courage then. I was already in line, keeping an eye on the Monster while Hubby bounced E in the Bjorn. I called to him across the stall, "Grab me a couple of those artichokes."
"A couple of the whosawhatzits?"
"The artichokes."
"What do they look like?" he asked
It seems Hubby should also be considered a backseat gourmet. After a verbal map ("To the left of the peppers") he grabbed a couple, we paid and we were on our way.

After a few days delay due to birthday parties and swing set erecting I got down to tackling the artichokes. Unfortunately, none of the recipes in my cookbook collection appealed to me. That meant stealing the laptop from the Monster to do some research. This is not a good idea when you are trying to make dinner because You Tube is the best invention ever. Daddy searches for videos of baby belugas, dolphins, and killer whales while I start dinner. That lasts until Mama starts chopping and she has to help. And help she did. 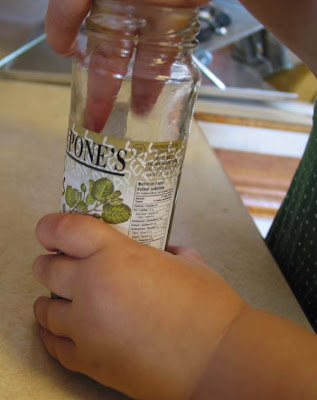 I found a recipe for grilled artichokes with a mint caper vinaigrette. Sounded yummy to me. As a plus, the barbeque was already on for the bison flank steak we were also having. I squeezed my lemon, chopped my garlic, picked my mint, and found the capers in the fridge. I pulled a couple of the capers out to start chopping.

"Beans!" The Monster exclaimed. I tried to explain to her that they weren't beans, but she insisted they were. Okay then, try one. Who would expect that these 'beans' would prove so tasty to a 2 year old? If only her fingers were long enough to reach into the jar.

Back to dinner. I trimmed the artichokes, set them to cook in lemon water, and hoped I was doing it right. When the steak went on the grill I also put on the artichokes. Meanwhile I boiled some potatoes and tossed them with cream and fresh dill. When everything was done grilling I tossed some greens with the mint caper vinaigrette and topped the artichokes with the same. At least I knew The Monster would like the vinaigrette. 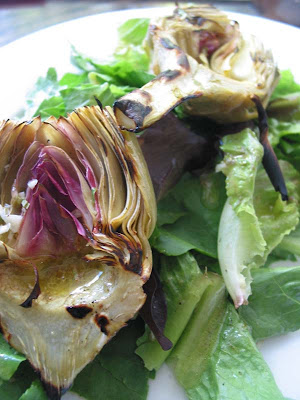 After savagely working her way through all her steak and a good chunk of Daddy's she decided to try some of her artichoke. Before that it sat forelornly on her plate, a pale green chunk with a few pieces of garlic clinging to it. It was a good thing I still had some of mine left because she wanted more, and more.

Lessons learned - salty foods in brine should all be assumed as good; you need to either trim more off the artichoke before cooking or cook it longer so as not to waste as many leaves or buy it closer to the peak season; and buy more artichokes next time.

Get your toddler to shake together all ingredients in a sealed jar. Stand close in case she decides she is done with her task mid-shake. Season to taste.