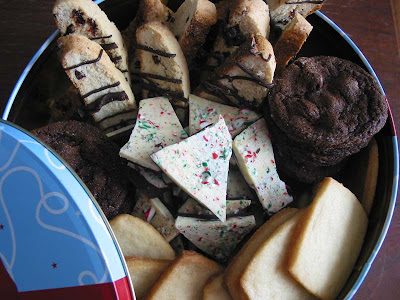 We made a few things in our house the past few weeks. Nothing fancy, but some homemade treats to share with neighbours, the daycare, and some friends. I wanted to make more, but The Monster was sick and baking wasn't high on our list of things to do.

That still left us with some very yummy results. There was my peppermint bark, cherry vanilla biscotti, sugar cookies dusted with vanilla sugar, and my all-time favourite cookie for Christmas - chewy chocolate gingerbread. I think The Monster agrees with me already. 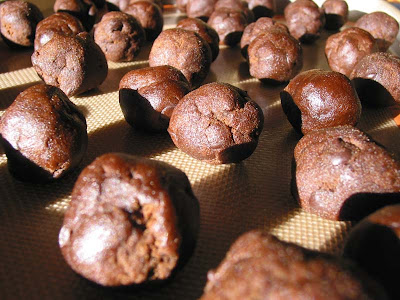 There are few recipes in all the magazines I read that capture me as much as this one. Good ol' Martha. I've been making them for 10 years now. And it's no wonder that she chose them for the cover of the Cookies cookbook, where the recipe is repeated. I've done nothing to change the recipe, so I won't repeat it here (check out the link above). But I encourage you to go out and make them - right now. 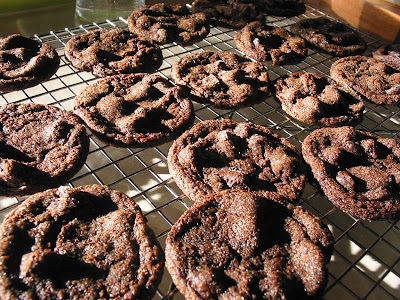 We are currently a nut free household, so my childhood faves are still off-limits. Rugelah and something called Christmas Jewels were the treats that graced our table for dessert on Christmas Eve, along with shortbread and so much more. I'm hoping that our nut allergy potential is proven wrong in time and I can introduce these to the girls.
For now, I am phenomenally happy with the sugar cookies. I tried Martha's recipe and this year it just did not work. Maybe I was overtired when I mixed them up and missed some flour. I'm not sure, but I ended up throwing out the entire batch, what I baked and the rest of the dough after I gave up - an entire pound of butter all said and done. I remembered Julie posting about them after her adventures in Jasper and tried her recipe. Oh. My. Gawd. Fantastic. Nearly as good as these ones, but homemade.
I changed Julie's recipe only in delivery. Rather than roll them into balls and press them down I pressed the dough into a rectangle, sprinkled them with vanilla sugar, and cut out squares. The dough is quite soft, so I thought this would work better. Besides, I already had round cookies and wanted variety.
It was back to Julie for the biscotti as well. I used her basic recipe and added my own flavourings. There were dried cherries in the house so I chopped them up, used vanilla sugar, and doubled the vanilla extract. It would have been preferable to use a vanilla bean, but there were none in the house. As a final touch, I drizzled some melted bittersweet chocolate on top.
Unfortunately, I wasn't able to deliver our treats to daycare as The Monster was in no condition for play and company. That means another round of baking in the New Year. I'm sure the girls there will be in no mood for baking in January, but I have a lot of butter and flour to get through. Truth be told, we never need a reason to bake in this house. But I am sure glad we have people we can share with.
Posted by Cheryl Arkison at Tuesday, December 16, 2008

WOW, I am so impressed I'm going to go bake fruitcakes Right Now. And maybe some chewy chocolate gingerbread...

I haven't seen the recipe for the choco-gingerbread, but I feel compelled to obey you...and make some right now. I'll add them to my list!
Such a lovely tin! Anyone would be lucky to receive it.

Hope everyone gets better soon.
PS
"Party in my tummy" has been VERY popular around here.

Wow, and I thought *I* was baking a lot... it all looks fantastic!