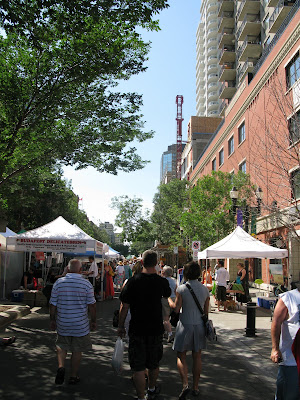 Hubby and I missed the whole loft train.  For awhile we referred to our flooded and unfinished basement as a "New York Open Concept Loft-Style Basement".  Had we eschewed getting a dog I think we may have found ourselves one of the original warehouse conversions in downtown Edmonton. Okay, I would have fought for it and he would have defended his manly right to a lawn.
Back then downtown Edmonton was a place that positively died after 5 pm.  Other than a handful of restaurants, a mediocre casino, and lots of offices filled with hard-working lawyers there wasn't much going on.  And what little was happening was the sort of activity that most of us don't want to see. No matter how cool the space I never would have convinced him to move there. I still don't think I could convince him - even without kids and dogs and the new lawn - but the City Market could possibly be tipping point. 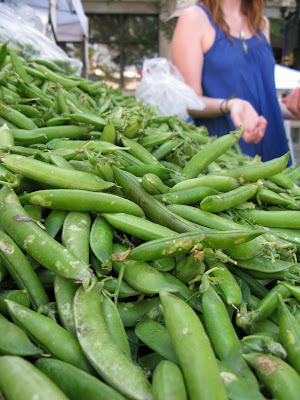 Downtown Edmonton now is certainly not the place I wanted to move to 10 years ago, and not even close to the place it was 6 years ago when we left the city.  Damn, it is a vibrant place! There are phenomenal restaurants that actually serve more than lunch, lofts and condos sprouting up everywhere, and retail stores that sell gorgeous, trendy, and expensive stuff. There's even a grocery store.  Not a corner store, but an actual grocery store right in the core.
The City Market, however, is an homage to the old nature of a farmers' market - bringing produce to the urban markets. Located just off Jasper Ave, on a street filled with refreshed and new buildings, the City Market brings over 60 vendors - both food and craft - to the new denizens of downtown Edmonton. it also brings people tired of the crowds, strollers, and popularity of both the Strathcona and St. Albert farmers markets. Plus, they have really cool traditions. 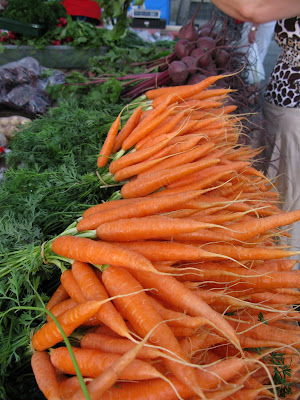 My sister-in-law and I - kids in tow - hit the market on what was probably the first really good weekend for local produce.  There were carrots, peas, greens, potatoes, herbs, strawberries, scapes, baby beets, and those fabulous sour cherries. We sampled and drooled our way through the stalls.  She's been there before so she pointed out some great crafts (I got a fantastic dress for The Monster) and knew where to get the better deals.  We weren't crowded with our strollers and my nephew flirted his way into the hearts of everyone woman he met.
It was really fantastic to see the area so alive, so vibrant.  As a former Edmontonian I will fully admit to pride in the city, the area, and especially the market.  In fact, the only thing that spoiled my morning was the lady who stole my strawberries.  Seriously, I said quite distinctly and not loudly that I wanted two pints of strawberries to the vendor and this lady pushed her hand through the person next to me and my sister-in-law and practically snatched it out of the vendor's hand. Considering that there were only three pints left and one of them as already in the hands on my sister-in-law I, being a nice person, said nothing and settled for one pint. 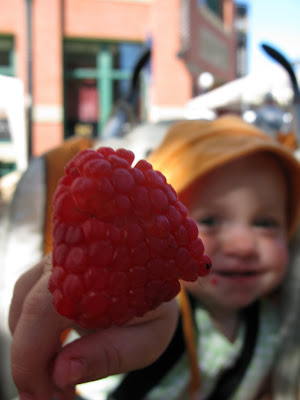 There must also be something special about the atmosphere there.  Immediately after I delivered a huge speech about how Smilosaurus ate everything but raspberries she started grunting, pointing, and rubbing her hands together while I paid for my peaches and raspberries. For those of you not up to speed on baby speak that means "Please, please, pretty please can I have that? NOW!" So I grabbed another pint, we sat on the curb, and promptly ate them all. Yup, there is definitely something special about the place.
Posted by Cheryl Arkison at Thursday, August 06, 2009

It has quickly and by a wide margin become our favorite market in the city and area, for all the reasons you mention.

Love the photos, especially the raspberry on the finger tip.

I love to hear stories like this -- a major city finding its roots in food.

There's just something about outdoor markets, isn't there? It's too bad we missed each other that day!

I told you we had to get there early! I have missed the Green Valley strawberries on more than one occassion!

I understand the brawl over strawberries - real ones are scarce this year! Love that market - wish it was open when I'm going to be in Edmonton this Thursday!

I love this market too - especially because I live four blocks away! It really is great and sometimes I wish it was open year-round, but obviously the seasonal bit is part of its charm. I don't even push a stroller but I am also happy for the extra room, especially when I'm in a hurry. I am also in love with the Sundog Organics stall this summer. So much beautiful variety of producer and such nice people.

I'm just curious - which downtown restaurants do you think are fabulous? There are many we haven't tried yet.