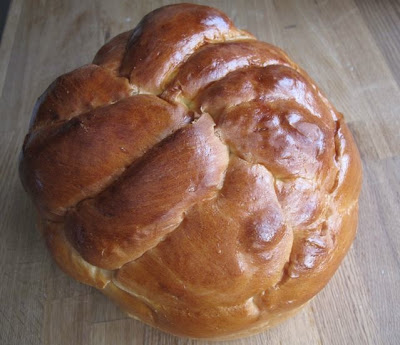 A line of dancers - men dressed in red pants and white, puffy sleeved shirts and women in embroidered velvet vests with flowers and ribbons in their hair - stand in a semi-circle.  With one hand on theirs hips the other stretches to the side, beckoning your eye to a gap in the line. From that gap emerge two women holding nothing but salt and an elaborately braided bread in their hands.  In contrast to the energy of the dance that proceeded them these women exude calm and warmth. They present the salt and the bread to the audience in a gesture of welcome and the performance continues.
If you've never been to a Ukrainian dance performance this must seem odd. For us Ukrainians though, the welcome gesture of bread and salt is ingrained.  By nature Ukrainians are generous and love to introduce a party. Performers have merely taken the tradition that is well known in any farm town or village and adapted it for their audiences.
The bread in question is called Kolach.  Traditionally it consists of three wreathes of dough, braided intricately and stacked.  Centered in the middle of the wreathes would be a candle and the bread would be offered with salt for the home. Kolach is also one of the twelve traditional dishes of Ukrainian Christmas Eve.
I must be in a Ukrainian kind of mood this week with borscht and now this. But when our new neighbours moved in on Friday my first thoughts went to baking bread.  It should be noted that The Monster thought we should bring them cookies and Hubby settled on wine. Rather telling, don't you think? So I baked bread yesterday and we delivered a warm loaf, along with the cookies the girls and I made.
The recipe is one I pulled out of the family's go-to Ukrainian cookbook - The Alvena Homecoming Cookbook. In case you aren't from Saskatchewan, Alvena is a dot on the side of the road that is literally made up of three streets and a hundred farms.  And it happens to be my mom's hometown. The cookbook is 30 years old, published with a collection of recipes for the 75th anniversary of the Province. It includes such clear directions as "Knead well and let rise," as the first instruction and "Bake the same temperature as you do your own bread." I think I need to try the recipe again before I share a modern version.
In the meantime, I'm toasting our new neighbours - a couple under the age of 40 is still a novelty on our street - with my own Kolach.
Posted by Cheryl Arkison at Saturday, January 09, 2010

You nice neighbor, you!

The cookbook sounds intriguing. What a good thing to have around.

Oh lovely. Your neighbours are so lucky.

I'll have to pull out the Ukrainian cookbook my mother-in-law gave me and start trying some of the bread recipes in there.

I love hearing about the food you grew up eating, the food tied to your family! I also L-O-V-E your new header. look at those kiddos, growin' up :)

I am going to try it over the weekend. Love the blue cheese twist.