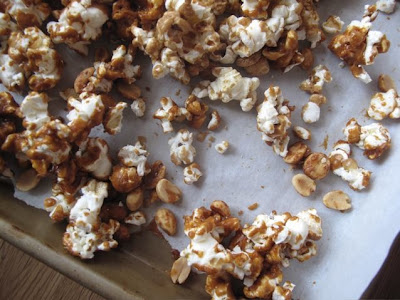 In a fit of accidental drinking and eating Hubby and I discovered a fantastic food/liquor combo. Scotch and caramel corn.  In particular, peanut and sea salt with my caramel corn and a smoky scotch like Caol Isla. Okay, so the drinking wasn't accidental, but the insane hunger that led us to the Scouts caramel corn was.
Not wanting to repeat ourselves, nor get into that beyond sweet caramel corn again, as well as prep for My "Whiskey for Dinner" class tonight I set out to make my own caramel corn. How refreshing it was to discover that it is so damn easy. Pop some popcorn, make some caramel, toss together, and bake at low heat. That's it. I even encouraged the men in our class tonight that it was dead easy and hopefully they are logging on to get the recipe right now. 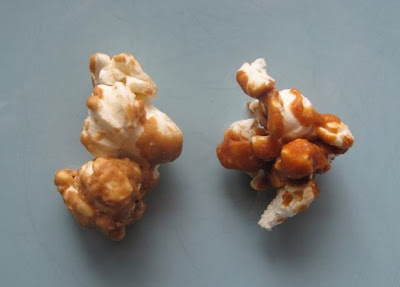 One of the surprising things in my research was that 99.99 % of the recipes I found used brown sugar.  Actually, I didn't find any that used white sugar, but I can't conclusively say that there isn't one out there. The first batch I made was with the "best brown" sugar I keep in the house for oatmeal and cookies.  It was good, once I got over the concept of adding baking soda to the recipe. But I knew I wouldn't have enough, plus I wasn't that fond of the colour.
The second batch was with the "yellow" brown sugar I borrowed from the neighbour when I realized that the nanny had used the last of my brown sugar making cookies - not that I was complaining. And, I'll admit it, I was afraid to try white sugar since I found no recipes with it. So yellow brown sugar it was.
Can you tell the difference in the photo above? Best Brown on the left, yellow brown on the right. 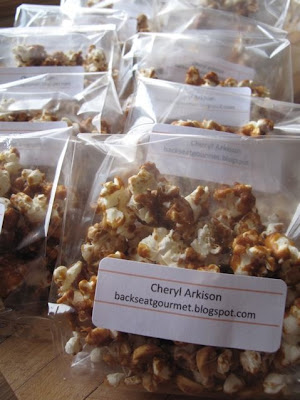 So I had my caramel corn ready to go. Good to go. Loaded up I joined a great group of guys at J. Webb tonight. Where are my single ladies?  Seriously, develop a taste for scotch or an open mind, because there are always a fun, intelligent group of guys at scotch tastings.
The caramel corn was on deck to serve with those lovely smoky or peaty scotches.  When it comes to scotch and food pairings you don't want to pair smoke with smoke. The sweet and salt of caramel corn matches perfectly with the smoky drinks. Actually, the caramel corn went with almost all the scotches.  As does chocolate, especially the fruity ones from Venezuela and Guatemala. 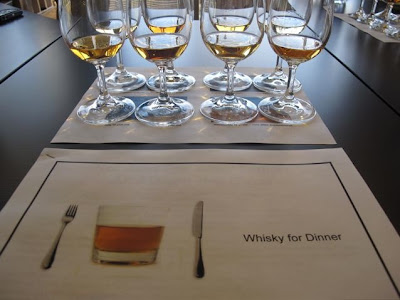 But pairing scotch and food is more than the sweet stuff. At its most basic level, pairing is pretty straight forward - match the basic characteristics of the scotch to your food. For example, the Lowland scotches are lighter, so they work well with rich cheese, honey, and fruit. Something like a pear and brie tart, or a cream of leek soup. And think about where the scotch comes from, The Island and Speyside styles work really well with seafood and both clean and salty flavours.  Even sushi works really well, or mussels with fennel.  The Lowland and Highland styles lend themselves to the richness of game meat, the sweetness of peppers, and even some spice.
But the star of the night was the caramel corn.  And the Glenfarclas 17 year old.
The caramel corn recipe I used was a slight variation on this one.  I added a bit more salt, used the roasted peanuts I had in the cupboard, and that yellow brown sugar. It isn't cloying, has the burnt sugar saltiness, and the baking soda makes the carmel crackle, but not crack.
Caramel Corn
Makes about 10 cups
1 3/12 ounce package plain/orginal/natural popcorn
OR 10 cups air popped popcorn
1 cup yellow brown sugar
1/4 cup light corn syrup
1/4 cup unsalted butter
2 tbsp water
1/2 teaspoon sea salt (cut this back if you prefer it without the salty taste)
1/2 tsp baking soda
1 tsp vanilla
1 cup peanuts, cashews, or pecans
1. Preheat oven to 250 degrees F. Line a large cookie sheet with parchment paper or spray with non-stick spray. Spray a large bowl.
2. Pop your popcorn and toss in the bowl, being careful to keep out any unpopped kernels.
3. Whisk sugar, corn syrup, butter, salt, and water in a small saucepan.  Melt and boil for 3-5 minutes until it reaches 250 degrees F on a candy thermometer. You need the candy thermometer, so don't try to just eyeball this step.
4. As soon as you reach temperature stir the baking soda and vanilla into the caramel.  Pour over the popcorn, add the nuts, and stir together.  You won't get a complete cover over the popcorn, but stir well and try to get a little on each bit of popped corn. Spread out on the cookie sheet.
5. Let cook slowly in your low oven, stirring gently every 20 minutes, for 1 hour. Let cool completely before enjoying.
Posted by Cheryl Arkison at Thursday, March 18, 2010

Mmmm... I'm imagining that caramel with some smoky scotch right now - sounds like an excellent combo! Sorry I didn't make it out to your scotch and dinner pairing event, I'm sure I missed out on a lot! Are you planning to do any more?

Cheryl...I absolutely love that you went to a whisky for dinner gathering. How fun is that?
Reminds me of my day as a beer judge last summer. Me and a bunch of old guys tasting homebrew after homebrew for a competition. Loved it. If only we had that popcorn to go along with it!
We had chocolate popcorn at a restuarant the other day. I was skeptical but it was DELISH! Popcorn, melted chocolate, slightly salty, and then chilled. Absolutely scrumptious.

What a great sounding evening! caramel corn is all over the place these days, isn't it? Molly sold me on trying her version too - although I haven't got around to it yet. Yesterday we made pink popcorn for an upcoming Easter story.. not quite as delicious as caramel I'm afraid, especially with scotch, but the kids liked it!

I made a variation of Molly's recipe for Christmas gifts last year and it was big hit. But to serve it with scotch? I had no idea. In fact, I don't think I've ever had scotch before but I'm so impressed that you have and that you know so much about it. Awesome!