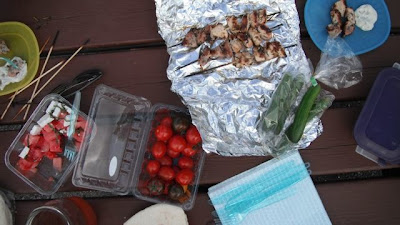 Today was a luxuriously glorious day. The kind of day you are afraid will never return. It was sunny, hot, but not too hot, and the kids slept in. That meant there was nothing to do but make pancakes for breakfast and head out for the day. Well, after I ate a whole bunch of the first crop of BC strawberries too.
So we loaded up the Chariot, got on the bike, packed some cherries, and went on a little adventure with the girls. It was perfectly suburban, finding a hidden playground in a chi chi neighbourhood, enjoying sandwiches at Heritage Park, and taking a ride along the Glenmore Reservoir.
That left a picnic as really the only dinner option. A picnic at the Splash park no less. Of course, that meant the girls ate very little in the midst of playing. That just means pancakes for breakfast again tomorrow morning.
On the menu tonight was some souvklaki I made during naptime. Garlic, lemon juice, olive oil, along with with some fresh oregano, mint, and rosemary took their own nap with with chicken and pork. We grilled it just before we left for the park. Wrapped in foil it was still warm when we arrived. 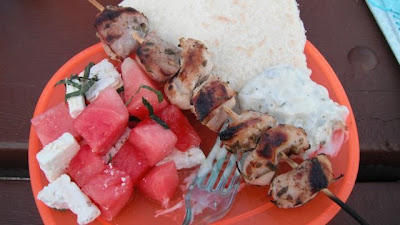 We also ate some Gull Valley tomatoes and cucumbers, pita bread, tzatsiki, and a side salad of watermelon and feta. I haven't had that salad since last summer, boy have I missed it.
Cut your watermelon in chunks. Toss with about a third as much feta. Top with some chopped fresh mint, freshly ground pepper, and a drizzle of olive oil. To be honest, I think the original recipe comes from a Nigella Lawson book, but she may have included olives as well. We aren't olive fans in this house.
So we unloaded at the park, set the girls to running around, and chowed down. I even had an interesting conversation with a man at the next table over, but I could have done without stories about war in Lebanon in the 70s. That's the risk you take for taking Sunday dinner away from the dining room table. A small price to pay to cap off this beautiful day. 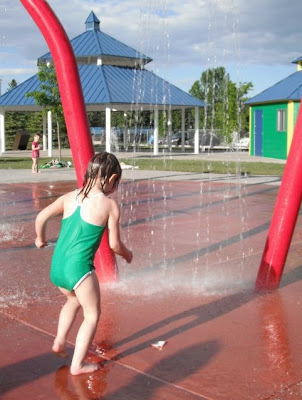 I love spontaneous outdoor dinners. And what a great splash pad you have.