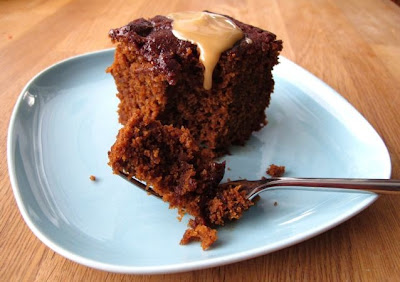 This is the cake that very nearly saved my life. Not changed my life, saved my life.
I have a very bad habit of waking in the middle of the night and snacking. I totally blame the tiny bladder I was blessed with, it wakes me and I'm left with nothing to do but snack before I try and get back to sleep. One April morning I awoke and tried to talk myself out of the extra ten steps to the kitchen for a piece of leftover gingerbread cake. I have no will power when fully awake, let alone at 3 am.
There I found myself, a piece of cake in hand and staring out the window when I noticed an orange glow. It took a few seconds to register that the glow wasn't actually supposed to be there. And a few seconds longer to realize that the glow meant fire.
Hubby's car was parked behind our garage on a parking pad. The car was the 1975 Triumph TR6 he bought a decade before. For years it had been in need to repair. In our garage sat the engine and an extra transmission. We'd moved 6 months earlier and he borrowed a flat bed to transport it all 3 hours down the highway. He knew exactly what he was going to do to the fix that car.
Having it lit on fire wasn't part of the plan.
In that eventual moment when I realized the car was on fire I screamed for him. He came running out, yelling at me to pick up the phone and call 911, then raced outside to grab the fire extinguisher from our daily driver in the garage. The garage two feet away from the burning car. I'm freaking out while the 911 operator is quite calmly and kindly reminding me that cars blow up and perhaps we should not be standing in front of the windows, let alone trying to put it out ourselves. That's when Hubby reminds me that there is no engine in the car and the gas tank would be empty. I'm obviously not very smart when faced with fire.
Fire trucks come and with very little ceremony the flames are doused in just minutes. The facts all point to someone having thrown accelerant on the hood of the car and tossing a match. By the time I'd discovered the fire there wasn't much left.
The garage was also hot and had to be hosed down on one side, siding eventually replaced. If the garage had gone up we would have lost our other car, the one with a full tank of gas, and who knows what else. As sad as Hubby was at losing his car, we were thankful that that was all we lost.
We came in the house as the sun was coming up and cracked a beer, a bit charred ourselves. When I went to put the bottles away I noticed the cake. One piece of cake fallen on the counter, with a single bite taken.
Peterson Gingerbread Cake
This is the recipe of my sister-in-law's mother. Their family likes it with Bird's Custard Sauce or even cream cheese icing. I'm partial to it with some maple butter. It is moist and heady with gingerbread.
1/2 cup shortening (I use butter)
2/3 cup brown sugar
1 egg
1 cup molasses
2 1/2 cups flour
1/2 tsp salt
1 1/2 tsp baking soda
1 tsp ground ginger
1 tsp cinnamon
1/4 tsp cloves
1 cup hot (not boiling) water
1. Preheat the oven to 350 degrees F. Grease an 8'' by 8'' baking pan.
2. Cream shortening/butter. Gradually add the sugar, then the egg. Beat until light and fluffy. Add the molasses.
3. In a medium bowl whisk together the dry ingredients. Add to the batter, 1/2 cup at a time, alternating with 1/4 cup water. Beat until smooth after each addition. Pour into pan.
4. Bake for 45-50 minutes, or until a tester comes out clean.
1 cup molasses
Posted by Cheryl Arkison at Friday, December 17, 2010

I love a cake that can save your life. How many desserts can say that? Love it.

Thank heavens for the cake!

Well, that cake is definitely going on my "to make" list...it's bound to be a lucky cake.

Thank goodness for the cake and your tiny bladder! :-) So glad all is well.

My mom will love the shout-out!

Cheryl, I am honored you have used my recipe on your blog, but I am even happier that it saved your life!

I love that you went inside and cracked a beer. In the morning.

What an amazing story! So glad you and your family were saved by the cake. The best thing: Forever more you have an excuse to eat cake, "I NEED to eat the cake otherwise imagine what terrible thing could happen!" Now, I wonder if I can make that excuse somehow work for me....

Thank goodness for the cake! :) Bookmarked this - need to make it!

Oh my, what story, and how lucky you were there in time! Good to hear nothing else was lost. This cake really looks good, I love ginger in baked goods!

(I can't help but wish I could have published this story in Delish...)

The things that happen in the middle of the night. I am so craving this cake. My mom and grandma make this every so often. They make their's with a vingear sugary type sauce and topped with a dollop of whipped cream. DELISH!