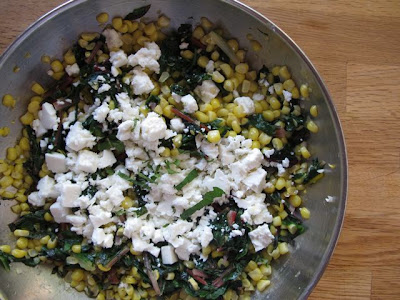 There was a stirfry contest between myself, an elderly neighbour, and my three year old Evil Genius. I was losing. Taken down even in my dreams.
My stir fry was watery and being taken over by corn and swiss chard. A watery stir fry is unforgivable, but I won't apologize for the corn and swiss chard. It is a tremendous late summer/early fall confetti combination. Even if it meant that my kid beat me in a cooking contest.
The first time I made this it was with the first corn of the season because I wasn't sure the kids would be up to tackling corn on the cob. I've since been proven wrong, but this is also such a popular dish in the house that we've been having it at least once a week since the corn arrived. Technically, I've been having it twice because any leftovers serve as an excellent bed for poached eggs in the morning.
This has been an excellent dish to take advantage of our CSA chard, garlic, and herbs. When I combine it with some Noble Meadows goat feta and use Mighty Trio Organics Flax Oil instead of Olive Oil it makes a completely Alberta dish.
Corn, Swiss Chard, Feta, and Mint
Serves 4 as a side dish
3 cobs fresh corn (0r 1 cup frozen niblets)
1 bunch swiss chard
1/3 cup water
1 tbsp olive oil
1-2 garlic cloves, minced
1/2 cup feta cheese
1 tbsp chopped fresh mint
Shuck the corn, being careful to remove the silks. Standing the corn straight up on a cutting board, slice off the kernels. Set aside.
Remove the center rib from the swiss chard. If they are thin or you chop them small, you can use them here. Otherwise, discard or set aside for another use. Roughly chop the leaves.
In a large frying pan with a lid toss the swiss chard with a generous pinch of salt and the water. Cook over medium heat for 5 minutes, covered. Uncover and add the corn. Toss well. Keep uncovered and cook for another 3-5 minutes until any remaining water is evaporated. Stir frequently. Add the oil and garlic and cook for 30 seconds.
Place in a serving dish and top with the feta and mint.
Posted by Cheryl Arkison at Wednesday, September 14, 2011

Oh, I love feta and chard. Looks like a quick and simple side for the harvest season. I'll have to look for chard when I'm at the market this weekend.

What IS chard? Is it like feta cheese? Whatever it is, this looks tasty to me!

Stir fry is awesome and this is one with a difference.

Mmm this looks so yummy! If you are a fan of corn AND scallops, please try out my seared scallops with corn salad: http://bit.ly/cornscallops

TECHNECHHACKS is a group of hacker that has their own specialty and they are five star rated hackers.


we deal with the total functioning of sites like,


Thus bewere of scammers because most persons are been scammed and they ended up getting all solutions to their cyber bullies and attacks by US.

I am Jason williams one of the leading hack agent.

PURPOSE IS TO GET YOUR JOBS DONE AT EXACTLY NEEDED TIME REQUESTED!!!

I’m always available for you when you need help.

Thanks for your time.