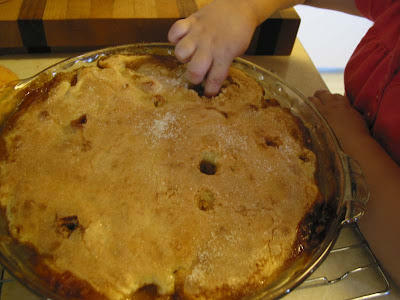 Lest you think my kid is some kind of glorious foodie that will graciously or voraciously eat what we put in front of her, I must set the record straight. On Wednesday night, all she ate was the above peach brown butter bliss cake. But only the cake, not the peaches. So much for her love affair with peaches. And this was after I made her chickpeas, a near constant favourite. Maybe it was the way I made them - roasted, with garlic and swiss chard - but she's never complained about any of those ingredients before. And last night she wouldn't touch her pierogies and kubasa (garlic sausage for the non-Ukrainians out there). Oh, and she would only eat the peaches, not the cake, after she ate a small bushel of peas instead of her Ukrainian feast.

Kids are fickle, and damn that is frustrating sometimes. We made a commitment early on that we would not make a separate meal for the kids once they were off babyfood. They eat what we eat. If they don't like it, then there is still fruit and anything that might be for dessert. We think that this will lessen any food issues and pickiness. I'm not sure where we got that idea because my parents made me eat everything on my plate and I was picky as anything until I started working in the food industry. On the flipside, Hubby's brother ate nothing and my mother-in-law will still cook separately for him sometimes (and he's in his 30s). Either way, it's what we decided and we're sticking to it.

I find myself caving a little by making sure there is a slice of bread with butter if I think she won't eat her dinner. And we almost never eat bread with dinner. I justify it by putting it on her plate as we sit down and not giving it to her after she's turned her head at the plate or spat out what she tried. She is a full-blown two year old and her attitude is not something I am pleased with. But really, am I surprised?

So we put some bread on her plate, and always a few peas in the pod. She is offered fruit and dessert, but she doesn't always take it. And I've stopped letting her eat after dinner. She has to learn that dinner is it. We hardly eat before 6:30 pm and bedtime is two hours later, she doesn't need a snack... unless we go raspberry picking.

Tonight I needed a break and cooked a guaranteed pleaser. Besides, I was at the dentist this morning and needed soft food. Quesadillas. A.K.A Exotic grilled cheese. Hey, I put diced tomatoes and chili powder in them! And I served them with my dad's famous salsa and the best side dish ever - guacamole. Seriously, I love guacamole almost as much as I love chocolate. Thankfully, the Monster does too. 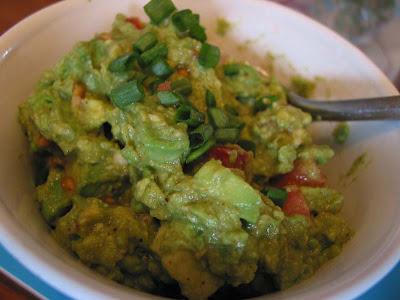 Here is my recipe for basic guacamole. I have no idea if it would be considered authentic, but it tastes pretty close to what a Mexican friend makes. Personally, I prefer it a bit chunky so I chop half the avacado and add a chopped tomatoe. This recipe is a basic proportion, but it can easily be doubled, tripled, quadrupled...

1. Mince the garlic clove.
2. Mix all ingredients together with a fork, mashing the avocado to your preference.
3. Season with salt and pepper.
Posted by Cheryl Arkison at Friday, August 22, 2008

I can relate, no questions there! I amide your stamina about not cooking a separate meal, but I live to feed people, and I can't handle the thought of my own child going hungry!It's tough, that's for sure. Glad I'm not the only one.

Sometimes that happens, doesn't it? Especially after the food fest she's just had. Hang in there. At least you are feeding her pretty good food rather than junk all the time. You know she has had good nutrients when she does eat! It sure is funny how it can be all or nothing.

Yeah, it will work out.

But yeah, kids are fickle. I think you have the right attitude toward the whole situation though, so keep at it! The Terrible Twos will be over soon ;)