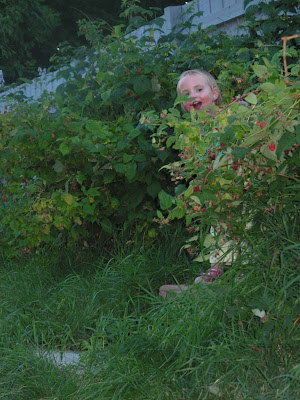 I can't decide what I am more excited for - making ice cream for the first time or the raspberry haul we got the other night. Perhaps it is the fact that I combined these two loves and made raspberry ripple ice cream.

Walking down the alley the other night, avoiding the jackhammer noise that Hubby was making in the backyard, we discovered an unattended raspberry patch. The Beagle Lady, so-called by us because she breeds and raises beagles in her house, has a huge patch behind her fence. The Monster and I rudely snuck a few berries and continued on our way. I mentioned the patch to Poppa, our neighbour, and ten minutes later he poked his head in the door to say we have permission to pick as much as we want.

Friday night we grabbed our bowls and went down a few houses. Grandma Betty and I picked and picked despite our aching backs. The Monster had her own bowl, but it was for show only as all raspberries went directly into her mouth. Soon she realized that it would be much easier to eat them directly out of my bowl. And so she did, by the fistful. Unfortunately she wouldn't sit still long enough for me to take a picture of her messy face and raspberry heart, from crushed berries running down her shirt.

After a day of snacks and breakfast of sweet ruby goodness I decided to tackle ice cream. Nigella Lawson has an entire section on ice cream in Forever Summer. I borrowed/stole my mother-in-law's ice cream maker the last time we visited, ice cream was mine to make.

Second lesson in ice cream making: make sure Hubby is home to keep both the Monster and the baby occupied so you can pay attention to the custard. Even then it almost curdled on me. I listened to Nigella and had a sink of cold water handy. She said if the custard starts to curdle to immerse the pot in the cold water and whisk the custard like crazy. It worked!

Third lesson in ice cream making: try to be patient after you put it the freezer to harden. Otherwise you have ice cream soup. Yummy ice cream soup! We'll see how the leftovers are tomorrow night.

Fourth lesson in ice cream making: make more ice cream. It really isn't hard - if I do it during naps or when the Monster is in daycare. I'm excited to try more recipes from Nigella, even if her custard seems a bit eggy to me. And I want to try some other recipes, like this raspberry ice cream. 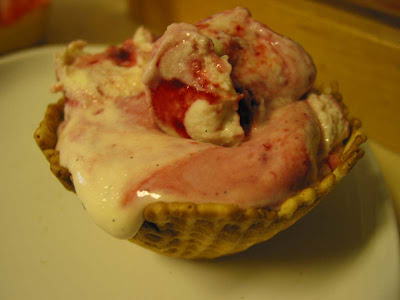 1. Fill a sink with cold water.
2. Split the vanilla bean down the middle and scrape the beans into the creams in a heavy pot.
3. Whisk the egg yolks and 150 grams of sugar together.
4. Heat the creams to a near boil.
5. Pour a small amout of the heated cream on the eggs, whisking continuously, to temper the eggs and not cook them outright with the hot cream. Slowly add the rest of the cream to the egg and sugar mixture.
6. Return the mixture to the stove and cook, whisking continously, until the custard no longer has bubbles on top and is thickened.
7. Immerse the pot in the cold water, add the vanilla, and whisk to chill. Alternatively, you could stir in the vanilla and set it aside to chill.
8. Once cool, follow the directions of your ice cream maker to make ice cream.
9. While the ice cream is freezing, blitz the raspberries, remaining sugar, and the balsamic vinegar in a food processor or mash together. Push through a fine mesh sieve to remove the seeds.
10. Freeze the raspberry mixture to thicken, but not set.
11. When the ice cream is frozen, but not solid, pour a third into a container. Dribble a third of the raspberry syrup over. Repeat with two more layers. Run a wooden skewer or sharp knife through the ice cream to swirl the raspberry ripple into the ice cream.
12. Freeze until set.

Can I be your new best friend?
(Especially since you're an expensive scotch drinker...)

Looks goood! And I want that cookbook...