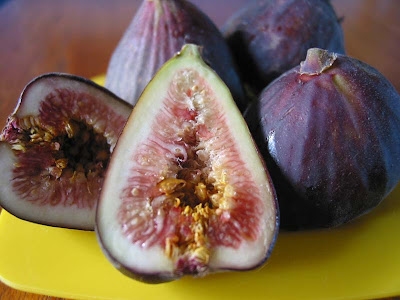 Call me boring, weird, or simply odd, but I hate Fig Newtons. Nothing about them is good. They are dry, pasty, and boring. And the fig filling? Just gross. But like most commercial food based on a real food, I figured the taste of the real thing would be enough to make me wonder how they can even put said fruit's name on the commercial product. Nope, I now think figs are gross too. And the Monster agreed with me.

It rather surprises me that I've never had a fig before, at least consciously. There had to be some snuck into salads at high end restaurants, or in a tagine. Nope, not that I can recall. And I am thankful for that. Otherwise I would have had a spoiled meal and not discovered some damn tasty frozen yogurt.

After we cut up a fig to try the other day and both spat it out in disgust I had to figure something out. I'd paid money for the damn things, I wasn't throwing them out. Then I remembered a old issue of City Palate that had a feature on figs (Julie?) and I'd actually pulled some recipes to try. Because I am a firm believer that roasting makes almost everything taste better I went with the recipe for Roasted Fig Fro-Yo. I did end up halving the recipe because that was how much yogurt I had in the house. 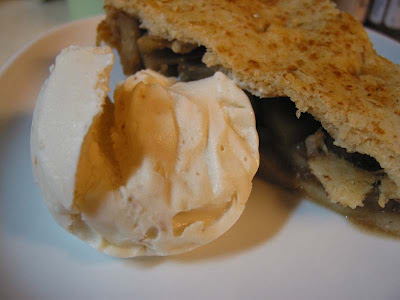 Huge success! The fro-yo was rich and sweet and oh so creamy. Did it taste like figs? Not the gross ones we had, but it definitely tasted like more than plain fro-yo. The Monster happily ate hers with a glass of pear nectar for a post-dogwalk snack. For me, it was the perfect accompaniment to the last of the apple pie my mom made for us on the weekend.

1. Drain the yogurt in a cheesecloth lined sieve set over a bowl for at least a few hours, preferably overnights.
2. Preheat the oven to 375 degrees. Spread the figs in a single layer in a small baking dish, drizzle with the oil and honey. Roast for 20 minutes, or until soft. Press through a sieve and discard the skins. Set in the fridge to cool.
3. Once the fig mixture is cool stir it into the drained yogurt. Freeze in an ice cream maker, according to manufacturer's directions.

For futher fro-yo adventures, check out this crazy video! 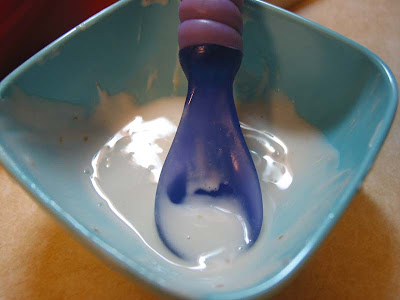 That sounds sooo good. You used my favorite yogurt, too!

I used to love fig newtons but they've done something to them the last couple of years. They are not delicious anymore. at. all.

Your recipe on the other hand sounds delish!