Despair is Setting In 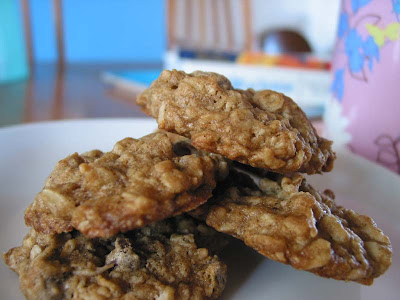 My lunch just consisted of tea and cookies. Just that, nothing else.

As happy as I am about the cookies, however, there is a little bit of sadness in our house today. We're out of maple syrup. Between the cookies and the baked beans I made for dinner - and the numerous breakfast of waffles over the past year - we finally polished off the 2 Litres of maple syrup we bought on vacation last autumn. 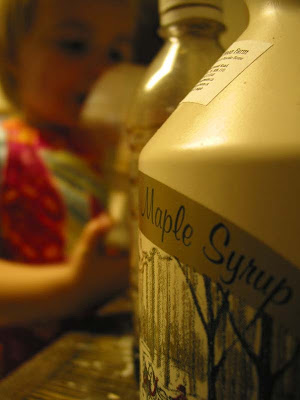 My love of maple syrup means I could never be a true locovore. Sure, I've tried birch syrup, saskatoon, and even made my own blackcurrent syrup. None of it compares to the simple maple goodness of a rich maple syrup. I've tried to describe the taste, but failed. You can only taste it for yourself and be enveloped by that golden brown elixir of the forest.

I love it so much that I pushed for our first dog to be named Maple - and won. (The other dog is Buster.)

In the morning, as the Monster's waffles are cooking she is asked if she wants syrup or jam. Well, that's not entirely true. Hubby always puts raspberry jam on them because that's what he likes. I usually ask, and she always picks syrup. And when I started being specific about it being maple syrup she started responding, "No, Buster Syrup!" 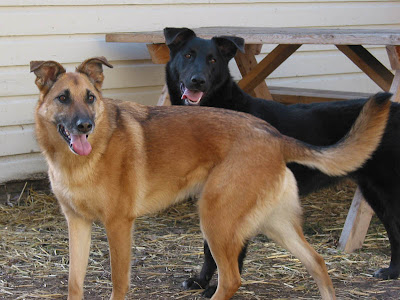 With the days getting shorter at an alarming rate it is tough to make it to the park after dinner. And when Hubby is out of town, as he is this week, I try to stay home in the evenings to save my sanity. Oddly, baking cookies with the Monster is generally a sanity saving activity. I just have to keep her hands out of the mixing bowl while it is turned on because she so desperately wants to lick the batter.

I pulled out my the last of my Sugar Moon Farm syrup, my Highwood Crossing Oats, and the jumbo pack of chocolate chips (we were out of raisins). We mixed, she poured, we snuck chocolate chips, and we baked. She obviously liked the batter too because that paddle was licked like it just came out of the dishwasher. And when she was done she announced that she was going to eat her hands as well. It was all I could do to keep her occupied with a dizzying amount of Ring-Around-The-Rosie while the cookies cooled so she didn't burn her tongue. 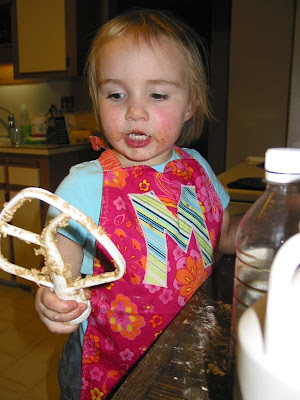 After years of testing recipes and getting used to the crappy oven that came with the house I finally got an oatmeal cookie recipe that makes my heart happy. I can't lay claim to anything original about it, other than using less coconut than called for last night because I ran out. Martha strikes again. When I found this cookie recipe I had to try it. Not shockingly, it was a clear winner for me. Even if it takes away from my precious maply syrup supply.

I do have a call in to Sugar Moon to see if they will ship to me. Maybe if I get the Monster to say please in her tiny but emphatic voice with a drawn out plea they will say yes...

1. Preheat oven to 325 degrees F.
2. In a bowl whisk together the flour, cinnamon, baking soda, and salt. Stir in the coconut. Set aside.
3. Cream together the butter and brown sugar until light and fluffy. Add the maple syrup and mix well to combine.
4. Add the egg and vanilla, beating well. Scrape down the sides of the bowl as necessary.
5. Slowly add the flour mixture to the butter mixture. When combined add the oats and raisin/chocolate chips.
6. Form 1 tbsp in a ball and place on a greased/line cookie sheet.
7. Bake for 10-12 minutes.

Oooo! Thanks for sharing that... I have never found an oatmeal cookie recipe that I like. I'll have to try this one sometime this fall. Fun to see such a sweet pic of your little one! Glad you made it through the maple syrup loss and your honey being out of town. I'm a sucker for a bad pun... I just paused in mopping my floor to check your blog... ah, the smell of murphy's oil soap! Must be going to my head.

Such an adorable apron! Looks like fun was had by all.

They were amazing! Thank-you!