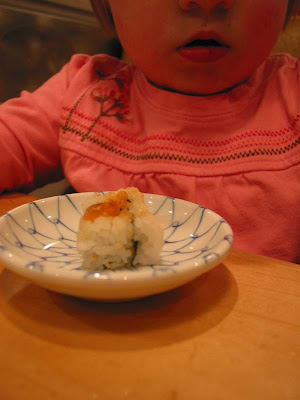 It was a surf and turf weekend. After a crazy week with the renos and lots of mess the family - meaning me - was in no mood for cooking. Out for steaks one night and then Hubby and I decided we needed sushi. Time for The Monster's first sushi.
We chose to go to Kinjo, a sushi bar in an old Tim Horton's. We've been there before, and been quite happy. On the plus side, it's close. It isn't the best sushi we've ever had, but it's good. And after our adventure on Saturday we'll be back.
The gregarious owner, Peter, greeted us with a carved orange and melons for the Monster, a forced (by knife) declaration of love from Hubby to me, a couple of boxes of Pocky candy for the table, and a free treat of four pieces of sushi rolls, a Japanese amuse bouche. It was quite the welcome and good start to the night. 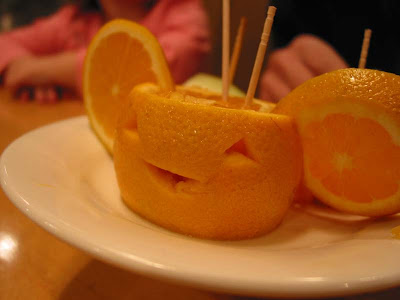 Hubby and I decided to simply order what we liked and let The Monster taste as we went. We've also learned in our restaurant ramblings with her to make sure there is at least one thing on the table we know she will eat. Usually that's bread and butter or some snacks we brought from home. At the sushi bar that is edamame.
She devoured her fruit, attempted to use chopsticks (giving up and spearing fruit with toothpicks instead like they were chopsticks), ate a whole lot of edamame, and opened wide for the sashimi we fed her off our chopsticks. She happily ate her tuna, salmon, snapper, tuna belly, and even tobiko. In fact, the tobiko was quite fascinating to her. After her first bite she swallowed and then had a little shiver, like it went down a bit wrong. We thought we were done with that but she asked for more. About the only thing she wouldn't touch were any kind of rolls. That wasn't surprising to us because she has never been a fan of rice.
Did I mention that she liked wasabi? 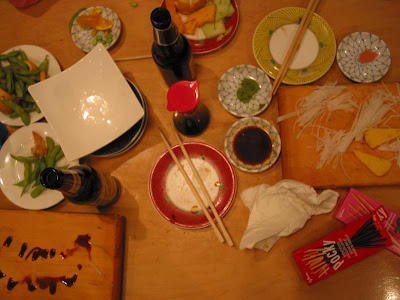 This isn't a restaurant review, but I would be remiss if I didn't mention the service at Kinjo. The kids were welcomed warmly. In fact, one thing that struck us was just how many children were there. All the kids are welcomed with a carved orange and the Peter told us that they'd served at least 30 oranges that night. It made us, as a young family, very comfortable. Sushi bars can have a lot of reverence and formality associated with their hospitality, making you feel welcome but hushed. Not Kinjo. Kids are encouraged and entertained. It keeps the parents happy (and coming back) and the kids a bit more adventurous. 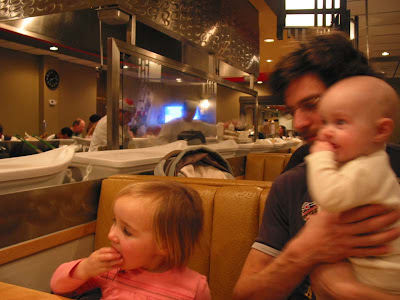 I love Kinjo if only for Peter, the forced declarations of love and the free Pocky! I've known Peter since he was a part-owner of Sakana Grill and he used to come up with any excuse to make people wear the samurai gear and sing the songs that they usually whip out for birthdays.

Another thing I like about Kinjo is that going with the theme of the rotating sushi bar (I think) the hot dishes are very small and thus inexpensive, so you can try lots of different types!