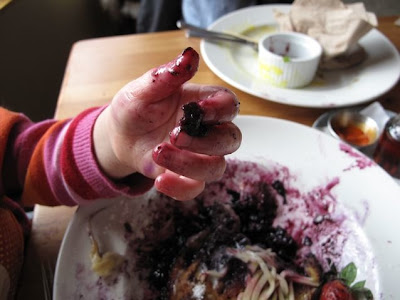 It's been a few weeks since we took a day off and headed a little West to Banff.  But we were talking about brunch and Hubby informed me that he would forgo any brunch in the city to drive to Banff for brunch.  All I have to say is "Be careful what you wish for..."
It was a strong desire for a change of scenery and the promise of a soak in the Hot Springs that took us to Banff.  We will head to the mountains to hike or bike, but we don't usually go in to Banff.  To be honest, we avoid it.  Do you remember that scene at the end of The Truman Show, where they hit the edge of the set?  That's what I feel like when I go in to the Banff townsite.  A wonderfully idyllic setting that seems too pretty to be real.  Really, just a mall with a fantastic ceiling.    This particular day we just wanted brunch, candy, and a soak.  Call it the urban adventure to the Rockies.
We paid our national park entrance fee, parked on one of the empty spots off Banff Avenue, and wandered, nose to the ground, for some eggs benedict.  Then talk about some fantastic friggin' luck.  We cut down a side street to check out a bakery.  Hmm, it smelled good but there were no eggs on the menu.  Hubby needs his eggs.  But just down the road we happened upon The Bison Mountain Restaurant and Lounge.  The downstairs is under renovation, but the restaurant was open.  They happily accommodated our stroller and put us in a quiet spot near the kitchen - not to hide us, but so we could see all the action from the open kitchen.  Then the brunch glory began.
Sure, they had a kids menu, but it seemed too safe, too boring, too predictable.  But the french toast sounded yummy, and it came with bacon.  Everything is right in the world if The Monster has bacon.  And some eggs benny that sounded too pretty to be real.  But oh, was it all so real.  Broek Acres Back Bacon with carmelized onions (or maple onion compote, as they called ).  And I had duck confit with fresh cheese curds on my benny.  Hands down, they were both the best eggs benny we've ever had.  And Hubby knows his eggs benny.  Hence the desire to drive there anytime.
The Monster's french toast came stuffed with smoked gouda and bacon, covered in a blueberry sauce and garnished with an apple slaw.  When the waitress brought the plates out she was looking for the third adult at our table.  "Oh no," we told her, "that's for her."  In the end she ate half of the actual toast, most of the blueberries, all of the cheese and bacon, and she split the apples with her sister. 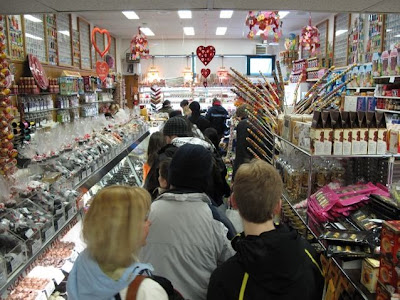 A little, just a little, walk was required after all that goodness.  Where else to go in Banff when you aren't there to shop?  The candy store, of course!  World famous, Welch's Candy Shop has been an institution for anyone who has ever made their way to the mountains more than once.  As a kid we always went there, even if we were only skiing for a day.  No trip was complete without my brother's wine gums, my sister's jaw breakers, my mom's almond bark, and my macaroons.  As I got older I always managed to sneak a couple of Flakes in the bag too.
The selection might be a bit overwhelming for the neophyte.  Just don't get overcome by the selection of imported treats and various cliche Canadiana candy.  Save your eyes for the large bulk display.  No, it isn't all homemade on site, but that isn't the point.  Just the visit, the sugar smell, and the white paper bag of your treat of choice are what it's all about. 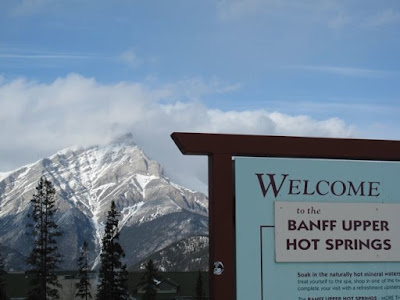 Finally, the day would not have been complete without a visit to the Banff Upper Hot Springs.  Yes, it's touristy and generally crowded.  But if you get there before 4, when the ski hills haven't cleared yet, then it's just you, some Canmore locals, and all the Japanese tourists.  And in the winter you can still enjoy the view before darkness settles in.  It sure as hell isn't going to burn off any of the calories from brunch and your candy, but it feels so good on work weary bones.
Hmm, what's Hubby doing this Sunday?
Posted by Cheryl Arkison at Friday, March 20, 2009

Eggs benedict with duck confit??????! I'm in. Sounds like a wonderful time!!!

"Just a mall with a fantastic ceiling." I love it.

You have a great blog. My name is Lee O'Donnell. I own and operate A Banff Boutique Inn - Pension Tannenhof, a small Inn located on Cave Avenue and I think that we make the best granola ever. I encourage to come stay with us or come to see us so that you can sample our homemade granola. Have a fantastic day.