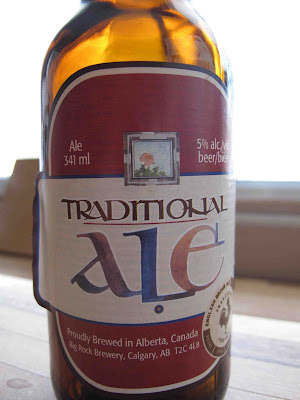 Because beer doesn't qualify as food (although it has qualified as dinner before) it cannot truly be considered a comfort food.  Besides, that would be a bit scary.  But beer in cake?  Definitely dinner and dessert, and a midnight snack or two, all in one tasty, brown, sweet, and crumbly package.
During one of our recent emergency room visits I flipped through the March issue of Chatelaine?  Does anyone else feel sadly old reading a magazine they remember their mom reading, while you snuck looks to make yourself feel older?  And can you believe there was a current issue of a magazine in a hospital waiting room?  I digress.
Not so surreptitiously I ripped out the page before we left.  Something about beer and cake together seemed ridiculously indulgent.  Other than cupcakes here and there and a birthday cake or two (and it's usually wacky cake) I never bake cakes.  We just don't have enough company to justify all that goodness in the house for me to eat over the next two days, to the neglect of any other food. 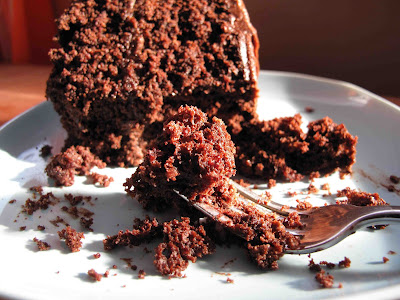 There was no occasion other than family dinner to make the cake.  With one sad looking Trad in the house I broke it open - resisting the urge at 10 am to take a sip - and got to baking.  It was an easy cake to make, as most are.  Really just a dense and crumbly cake, using beer instead of milk or another liquid.  Honestly, I was a little worried that it wasn't coming together well as the batter was quite dry.  And maybe it isn't supposed to be?  But it resulted in a wonderful cake.
Shockingly, I also followed the recipe and used the remainder of the beer for the icing.  It is a basic whipped buttercream.  I know most people find buttercream to sweet, but I recommend it in this instance.  There is a good ratio of cake to icing, unlike many a famous purchased cupcake, and the sweetness of the icing is balanced out by the crumb of the cake. 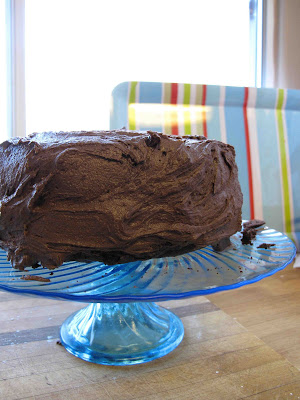 And, in case you were wondering, you don't really taste the beer.  Trad is not a mild tasting beer, but it isn't a strong stout like a Guinness (which is what was called for in the initial recipe).  There was just a hint of bitterness to the cake, and not enough that The Monster or Hubby went, "Hey, what's in this?"  We all just happily ate our cake, patted our tummies, and laughed through another loud and crazy meal time.  A kitchen antidote for a long and stressful day.

Chocolate Beer Cake
(adapted from Chatelaine, March 2009)
1 1/2 cups flour
3/4 cocoa powder
1 1/2 tsp baking powder
1 tsp baking soda
1/2 tsp salt
3/4 cup unsalted butter, at room temperature
1 cup lightly packed brown sugar
2 eggs
1 tsp vanilla
1 cup beer
1.  Preheat oven to 350 degree F.  Spray two 8 inch round cake pans.
2. Sift flour with cocoa, baking powder, soda, salt into a bowl.  Stir to mix.
3.  Using an electric mixer beat the butter and sugar for a few minutes until fluffy.  Add eggs, one at a time, beating well after each addition.  Beat in vanilla.
4.  Stir about 1/3 of the dry ingredients into the butter mixture, add half of the beer.  Repeat the additions, ending with flour.  Stir until evenly mixed.  Pour batter into prepared pans.
5.  Bake in centre of oven for 25-28 minutes.  Cool in pans on rack for 10 minutes, then turn out to cool completely.
Chocolate Beer Icing
3 cups icing sugar
1/2 cup cocoa powder
1/2 cup unsalted butter, at room temperature
1/3 cup beer (or milk)
1 tsp vanilla
pinch of salt
1.  Sift icing sugar with cocoa.
2.  In separate bowl beat butter until creamy.  Gradually beat in half the icing sugar.  Mixture will be dry.  Slowly add beer, vanilla and salt.  Add the remaining icing sugar.  Beat until well combined.
To ice the cake, slice off any bump from the top of the cake, making a flat top.  Place one cake on a plate or cake stand.  Spread a third of the icing on the cake.  Place remaining cake on top and gently press down.  Spread another third of the icing on top.  Then spread the remaining third of the icing on the sides of the cake.
Enjoy - with a glass of milk or maybe a scotch.  Oddly, a glass of beer doesn't seem to go well with a slice of this cake.
Posted by Cheryl Arkison at Tuesday, March 03, 2009

Yes, I do feel old reading Chatelaine...even older because I subscribe to it...I also ripped out the Beer Cake recipe...haven't tried it yet but I will be sure to now!

Glad I'm not to only one who 'borrows' articles out of waiting room mags. :)
I hear beer and chocolate is a great combo. Looks like this one is a winner.

Thank you so much for posting this recipe ... I've been thinking about it ever since you mentioned it. The cake looks spectacular and I cannot wait to try it. Printing this one out right now! :)