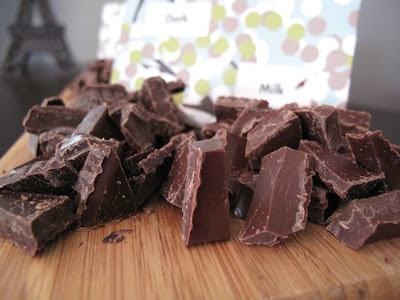 I have officially reached a point where there can be chocolate in the house and I am not constantly thinking about devouring it.  Shocking, especially to me.  That's what a week of hard core chocolate eating does to you.
On the weekend I co-hosted a baby shaker for one of my new nephews.  It wasn't about cutesy games or pastel-coordinated favours.  It was about friends and family getting together to officially celebrate the arrival of the latest member of Team A.  Rather than resort to hummus and spinach dip we decided on a chocolate theme for the food.  Who doesn't love a party with lots of chocolate?
We had cookies, chocolate covered cream puffs, a large platter of fresh fruit to make us feel somewhat virtuous, and some memorable tasty treats.  This was my chance to try a chocolate blackout cake.  I need special occasions to bake cakes and this was one I was dying to try.  It was a hit at the party, with not even one extra crumb leftover.   Surprisingly I was rather disappointed myself.  Moist cake covered in chocolate pudding covered in cake crumbs - it should have been spectacular.  It was sweet, creamy, and almost fudgy, but it didn't knock my socks off.  I was, however, in the minority with this opinion.
Another hit with The Monster was the chocolate tasting bar.  I chunked up some dark and milk chocolate from Bernard Callebaut, Choklat, and Kerstin's Chocolate for a side by side tasting. There was nothing official or even blind about it.  It was striking to taste the differences.
Bernard Callebaut was smooth and tasted exactly like you would expect the chocolate to taste. Choklat's contribution was also smooth, but distinctively fruity.  I went with their Brazillian 48% Milk and Ocumare 70 % Dark.  They really are unlike anything you've tried - sweet but far from cloying, smooth but not terribly creamy, and fruity without tasting juicy.  Finally, we had two offerings from Kerstin's Chocolate in Edmonton, the Venezuela Dark Milk Chocolate and the Ecuador 72 % Extra Dark.  It is impossible to say what was the crowd favourite, but their was none of the Choklat Milk left.  Of course, that may have been due to the proximity to the edge of the kitchen island and The Monster's sneaky fingers. 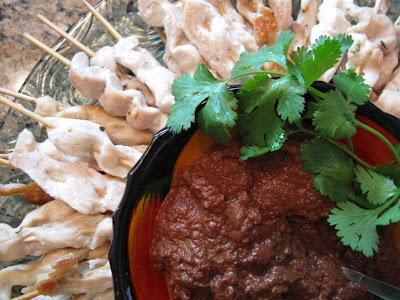 Truly, though, my favourite thing about the food was this chili chocolate sauce.  I didn't even make it, my talented mother-in-law did.  When the other co-host and I decided on the chocolate thing we tasked my mother-in-law (and grandma of the star of the show) with bringing something savoury.  We knew she would be up for the challenge, and boy did she step up!
At the party she served the sauce with some chicken skewers.  On Monday I spooned some warm sauce over grilled pork chops.  And then I cooked some black beans and made a dip by pureeing the sauce and the beans together.  It needed a touch more chopped cilantro at that point, but it was still fragrant and yummy on some rye bread at Julie's house the other day.
Chili Chocolate Sauce
(Adapted from this recipe)
1 tablespoon kosher salt
1/8 teaspoon freshly cracked black pepper
1 tablespoon granulated garlic powder
1/8 teaspoon dried oregano
1/8 teaspoon dried basil
1/8 teaspoon dried thyme
pinch crushed red pepper flakes
1 poblano chili - grilled, peeled, seeded, and diced
1/2 onion, diced
2 ounces red wine
1/4 cup chopped milk chocolate
2 tablespoons chili powder
3 medium tomatoes, chopped
2 tablespoons chopped fresh cilantro
1. Combine the salt through red pepper flakes into a seasoning mix.
2. Over medium-high heat saute the poblano, onions, and a pinch of the seasoning mix.
3. Add the red wine and chocolate and stir until combined.  Add the chili powder and remaining seasoning mix.  Stir until thickened.  Add the chopped tomatoes and stir.  Continue to cook for another 5 minutes.
4. Remove from heat, puree, and stir in cilantro.
PS  Who am I kidding? I'm digging out some of the leftover chocolate right now.
Posted by Cheryl Arkison at Thursday, May 14, 2009

Interesting - I've got to try this sauce - sounds like it would be delicious and give me yet another way to enjoy chocolate, too!

I still can't have chocolate in my house without devouring it. I don't think it's possible for me :)

I sometimes buy a chocolate that has hot chili in it. I love that little kick in the back of the throat along with the butter sweetness of chocolate.