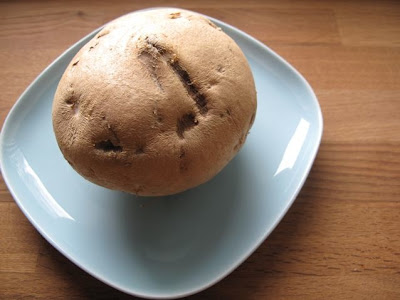 Behold the simply boring jicama.  Crisp but rather bland, fresh but neutral.
I can't say the first time I had it.  I do remember an extensive search to find the first one.  Once Hubby and I gave up our weekly trips to the bar on Friday nights we often found ourselves, with roommates by our side, watching Iron Chef and the Chris Isaak Show on our crappy oak cabinet TV.  Somewhere in there we might watch Emeril Live and any other random Food Network show because the rest of Friday night TV sucked.  So I have no clue who made jicama look good, but we became obsessed with finding it.
Every grocery store we went into for years afterwards would warrant a trip to the special vegetable section, where they housed the so-called ethnic veggies, in hopes of seeing the vaguely potato-like root.  This was before we shopped around much, relying on the farmers' market and the neighbourhood grocery store only.  Now I not only know I can find it in most grocery stores, but I know more than a few speciality produce stores which carry it.  And I am thankful for that because I love that root.
The Monster loves crisp veggies, especially peppers.  And Smilosaurus handled greek salad well last weekend, so I thought both of them would enjoy jicama.  I was half right. 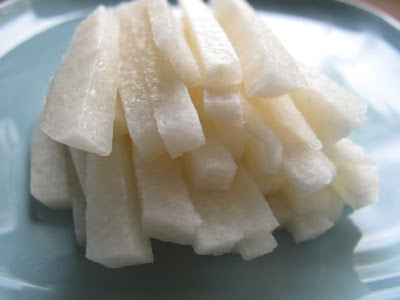 Jicama is common in Mexican and some Asian cuisines.  It has a simple, crisp flavour and texture - like a watered down apple or crisped up sweet cucumber.  It takes well to spicy or bold flavours like a sesame vinaigrette or chilis.
To prepare jicama you peel the thin papery skin and slice it, dice it, chop it, or julienne.  I've never eaten it cooked, but it is possible.  Truthfully, I like it as a simple raw veggie, alongside my carrot sticks and cherry tomatoes.  But my favourite way to eat jicama is to add it to slaw, maybe with some apples to compliment the simple flavour, or in a mango jicama salad.
When I served it last night I gave some to the girls as a simple matchstick first.  The Monster happily ate the pile placed in front of her, munching away as I chopped mango.  Smilosaurus was pretty much indifferent.  I don't think she had a problem with the taste, but the texture was still too crunchy for a girl without molars.  When it came to the salad, Smilosaurus picked out the mango and left a pile of jicama on the tray of her high chair.  I was hoping for leftovers, but both The Monster and Hubby ate more than their fair share.  I guess I better hit the grocery store again. 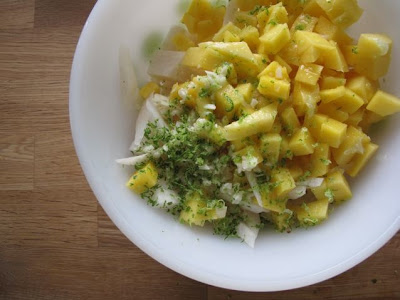 This is an easy salad.  It is easily dressed up and added to.  If I have it, I will add in some chopped fresh cilantro, minced red onions, or diced peppers.  It is also very good with some shredded savoy cabbage, some additional lime, and fresh chilis.
Mango Jicama Salad
1 jicama, peeled and cut into matchsticks
1 ripe mango, finely diced
1 lime, zest and juice
splash of olive oil
generous pinch of chili powder
salt and pepper

Mix all ingredients together, season.

I haven't had jicima in ages! I'll have to give that recipe a try..I bet my boys would love it.

this looks lovely! I love mango & jicama together. Glad you were able to finally find jicama...There used to be a great S. American-style restaurant near my house and their house salad had mango, jicama, & pomegranate seeds--I fell for the combo then.