Farm in the Family 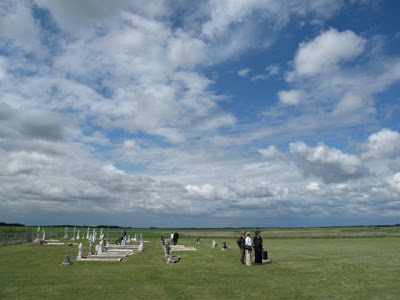 Yes, that is a cemetery there. The Alvena Cemetary, to be exact. My great uncle passed away last week so we were in Saskatchewan to say goodbye. It was a gathering of your typical giant Ukrainian family - my uncle left 10 children, 24 grandchildren, and currently 28 great grandchildren.  That is nothing to say of the fact that he was one of five kids with families of their own.
Uncle Bernard was a quiet, strong man.  Humble and hardworking, I always remember him with open arms, a quiet laugh, and the ability to observe and appreciate all that happened around him.  He loved horses, his family, and he loved his farm.  While I was sad that the girls never got to meet the man, I was deeply proud to take them and Hubby to meet his farm.  I can hardly remember him off the farm, even though I saw him at hall parties and wedding receptions.  Uncle Bernard's farm was Uncle Bernard. 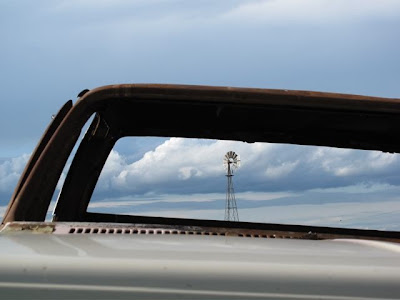 By the time I was old enough to have strong memories of the place it wasn't always somewhere I wanted to go. But as long as we got to hang out with our cousins, go into the fields, or feed the kittens in the abandoned chicken coop we city kids were happy.  Uncle Bernard was usually working during our visits.  He, or our older cousins, would sometimes take us into the swather or combine if it was harvest.  One time they let me drive the pick-up.  It didn't matter that I couldn't see over the dash, the purpose of our drive was to scare the ducks out of the field.
As we wandered around the old farm, buildings old and unused but the grounds, garden, and yard perpetually neat (this is the cleanest, most organized family farm ever), my brother and I reminisced about our visits there.  And suddenly the whining we did as children - well, me mostly - all went away. Those pathetic moments were replaced with pride in knowing that this farm is part of where we came from.
While my brother led a number of the kids - his, mine, and some other city cousins - on a tour of the buildings and machinery I followed and admired his knowledge and memories. During the tour The Monster was a non-stop question.  She wanted to know what every building housed, what each machine did, how everything worked, and just what it was all for. 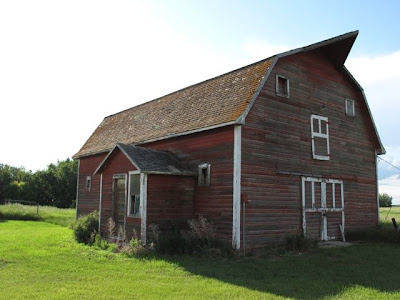 The farm is a working grain farm - wheat, rye, barley, peas. At one point it was a truly diverse family farm complete with cows, pigs, chickens, crops, and a garden to make any Baba proud. The barns, coops, and sheds are mostly empty now. Their usefulness replaced with metal quonsets and granaries, some heavy duty machinery, and the ever present farm dog, Rex.
The natural curiosity of a three-year old outweighed any potential boredom. While Smilosaurus busied herself with transporting gravel from one spot to another, The Monster followed my brother and learned everything she could about grain farming.
Boy did she learn!  It is a little over 7 hours of driving to get from Saskatoon to Calgary.  For the portion of it that she was awake our conversation went something like this:
Monster: What's the combine Mama?
Mama: The combine takes the seed off the grass, puts them in the dump truck, and puts the stalks in a line behind.
Monster: And where does the dump truck go?
Mama: To the granary.
Monster: And then what happens?
Mama: The farmer sells the grain and it goes to make things like flour.  And then we bake with the flour.
Monster: Oh. And what about the other combine?
Mama: It's not a combine, it's a swather.
Monster: What's a swather do?
Mama: It cuts the grass, like a giant lawnmower.  Then the combine comes and picks it up.
And repeat. And repeat.  And repeat.  Over and over again, for about 5 hours. 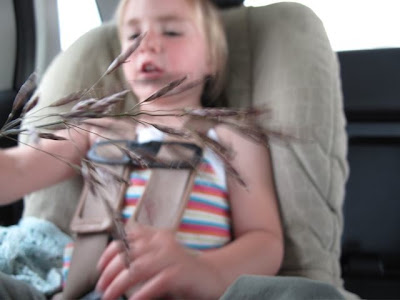 She finally had her lightbulb moment in the process during a bathroom break.  With Hubby rudely standing in the ditch I picked a stalk of some wild grass/weed/oats.  We now know that she is a visual learner because as soon as I showed her the grass and demonstrated what the combine and the other combine did something clicked.  Suddenly she was explaining the process to us, Grandma, the nanny the next day, her sister, and anyone else she saw, regardless of whether they wanted to hear or not.
We don't need petting zoos and picnics on our farm visits. The connection is already there for her. The connection to family, the connection to the process, and hopefully, the connection to her food. Uncle Bernard lives on in her, and so many more, because the farm - literally, and in knowledge and memories - lives on.
Guess where we'll be going come September?
Posted by Cheryl Arkison at Tuesday, July 07, 2009

Sound idyllic--for children and adults both. Sorry to hear of your uncle's passing.

Um, are you sure we're not related? My mother grew up on a huge farm in Saskatchewan and it's still in the family, has been for years.
I've been back once, but would love to take the kids.

Love this, LOVE her and am so glad you had a good trip!
Um...school for the Monster is it? Already? This is too much!
Auntie E

Great photos and a charming story about your trip. Thanks for visiting SippitySup and passing on your ice cream knowledge! GREG

Wow. This is the most amazing post. I HAVE to remember to come over here more often. Homemade ice cream for dinner sounds idyllice to me, by the way.