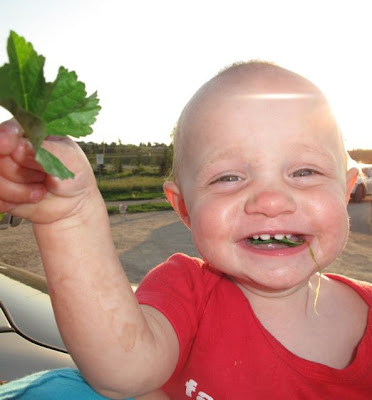 We've been heading down the the Southland Natural Area for our weekly CSA pick-ups for a few weeks now (but not this one because Jonathan's truck broke down).  Last week was all about green.  With Hubby out of town and a family trip to Edmonton for a baby shower it was a challenge to actually eat all those greens.  So I was a bit thankful, honestly, that we got a break this week.  It gave me more time to take advantage of all that food. It gave me a chance try something new with this herb called mallow.
The mallow was the first thing the girls grabbed out of our basket, right in the parking lot of the off leash park.  While we chatted with an old friend they kept dipping into the bag and pulling out those broad and slightly jagged leaves.  For a toddler who only recently decided salads were acceptable eating and a baby who spits out anything too flat I was rather surprised.
Following their lead I dug my hand in the basket to try it out. Hmm, if I hadn't actually felt it, I wouldn't have been I was eating anything at all.  It has such a mild, fresh flavour. Kind of like dumbed-down parsley. 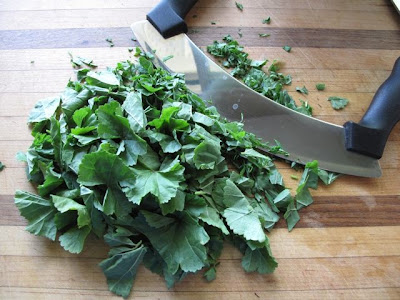 Considering the flavour, the most appropriate use of the mallow seemed to me to either include it as salad greens or make tabbouleh. Botanical sites suggested that I make a tea to ease my tummy troubles.  Yeah, that's not me. So I tried the salad, but I had enough salad greens and one can only eat so many salads in a week.  Tabbouleh it was.
And damn, what a fine idea that was.  It was the freshest, cleanest tasting tabbouleh I've ever made.  The girls devoured it at dinner and I had way more interesting leftovers to take to the office.
It wasn't exactly a traditional tabbouleh.  I prefer my tabbouleh with quinoa instead of bulger. This time I tried a red quinoa. And I added a touch of mint to boost the freshness flavour. I was tempted to throw some feta in as well.  Feta makes everything taste better in this house.  Next time I might at least use it for garnish.
No CSA or backyard stash of mallow?  Substitute another cup of parsley and you will still have a great salad. And you could use regular quinoa if you prefer. 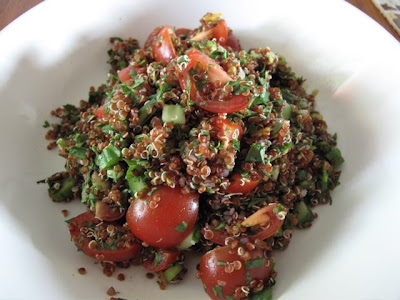 Mallow and Red Quinoa Tabbouleh
(serves 4 as a side or 2 for lunch)
1 cup red quinoa
2 cups loosely packed mallow
1 cup loosely packed parsley
1 cup loosely packed mint
2 cloves garlic, finely chopped
1 pint cherry tomatoes, quartered
2 salad cucumbers or a third of an english cucumber, cut into 1/4 inch dice
2 lemons
Olive oil
1. Simmer the quinoa with 2 cups water over medium heat until the water is absorbed and the quinoa splits and parts of it look like teeny tiny calamari.
2. While the quinoa is cooking finely chop all the herbs. Zest one lemon and juice both lemons.
3. When the quinoa is cooked toss together all the ingredients with a generous splash of olive oil.  Season and serve warm, cold, or at room temperature.
Posted by Cheryl Arkison at Thursday, July 30, 2009

I Know a lot about plants, and even pretty much about cooking/food, but this is a new one on me: mallow! Thanks for a great new idea, and now I have to plant some...

Okay, if Margaret Roach didn't know about mallow as an herb, I don't feel so bad. I have tons of this stuff growing in my yard. I had no idea it was edible.

Love that you used quinoa! I'll have to give this a try.

K, seriously adorable! And, trying it tomorrow for family picnik @ my Dad's - maybe Clarke will eat his greens. Wish me luck!

Is that a weed cause we got lots? And I'm gonna try this. Quinoa is on my 'approved' list and this intrigues me.