At Julie's house for Julie/Julia 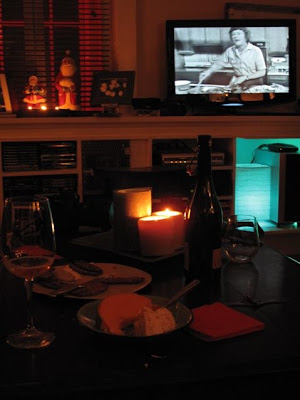 Eating in a room full of food bloggers and writers is almost as bad as eating dinner with toddlers, except the conversation is far better.  In the interest of the blog, the en mass photography when five bloggers gather for an impressive dinner is somewhat insane.  Sorry, there were only 4 photographers and 1 illustrator at our Julie/Julia themed dinner party on Sunday. Pierre stood back, secretly laughing I think, while the rest of us pushed buttons and tried to make adjustments for the fact that it was close to 7pm when we started eating, er... photographing.
It's a good thing that our vichyssoise was being served chilled.
The occasion of our gathering was ostensibly to celebrate the release of the Julie/Julia DVD today.  In reality, Julie invited us all together to meet, cook, chat, and celebrate. Most of us knew at least one other person there, and I think Julie knew everyone. (She really does know everyone.) Gwendolyn from Patent and the Pantry, Gail from The Pink Peppercorn and her sax playing husband, Pierre of Kitchen Scraps fame with his love, and then Hubby and myself all descended upon Julie with an abundance of butter, cream, wine, and our best stories. 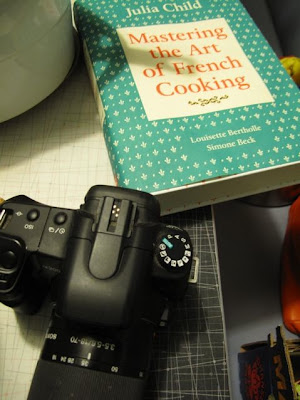 Our instructions were simple: make something from Mastering the Art of French Cooking.  We each volunteered a course/dish. There was the vichyssoise from Gwendolyn, surprisingly (to me) rich and actually quite refreshing even though it was minus a billion outside. For dinner itself Julie made Boeuf Bourguignon. Pierre made Ratatouile and the most amazing potatoes ever. Gail spent two days in the kitchen to make a Moussaka unlike anything I've ever had in a neighbourhood Greek joint.  Two days! Oh, and I made Reine de Saba and a souffle but I'll save the details for another day. 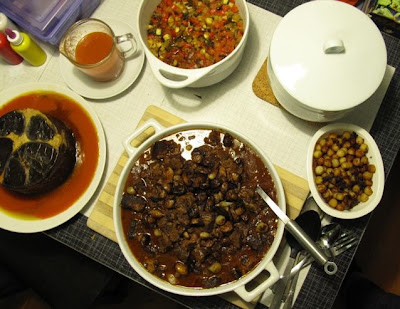 To start the night we toasted new friendships with French cider and bubbly.  And we watched old episodes of The French Chef.  Correction, we had it on the TV but were too busy talking. That theme continued for the night.  We were so damn eager at the beginning of the night, dutifully taking photos. Then we sat down to eat.  And drink. And talk.  So there might be one blurry shot of the souffle that Gwendolyn and I made together. 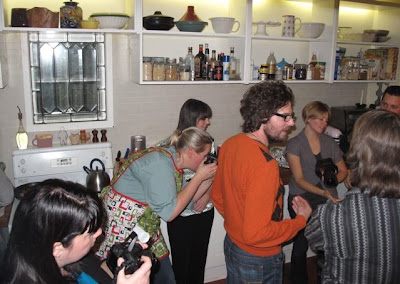 Aside from our critiques and comments about the books, cookbook, and movie (enough about Meryl already and how long exactly should I simmer for?) we talked and laughed.  I'm not telling secrets, but I do know about some tidbits about mascots, child actors, and degrees in sex.  But I'm not talking. In fact, I think I might still be digesting.
Posted by Cheryl Arkison at Tuesday, December 08, 2009

I didn't know Gail! I'm so glad to know you all - I've been looking for an excuse to do this for a long time!

I am not jealous of the Calgary weather but I AM jealous of your great foodie gatherings.

This looks like a real blast! I can't imagine taking 2 days to make anything (okay, my tower-of-truffles wedding cake is an exception) and admire the food, gumption and creativity behind this great party.

I don't know which is worse ... a whole flock of food blogger trying to capture a dish, or being the only food blogger in the room and getting crazy stares when you whip out your camera before you even take a bite. Generally, I find myself in the later category. LOL

Looks and sounds like so much fun ... and tasty too!