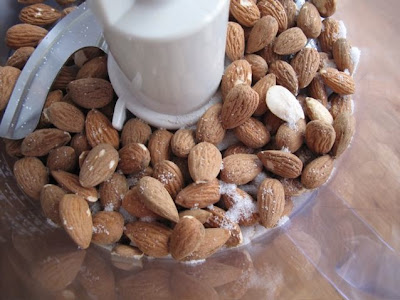 There is something immensely appealing about the making the last recipe in a cookbook. Don't ask me why, but I got a little giddy seeing that I was making the last recipe in Mastering the Art of French Cooking.  The occasion was our Julie/Julia dinner party and I was in charge of dessert.  Because I had not seen the movie I was at a bit of a loss for what to make.
My boss actually gave me the idea to make this cake.  She just randomly mentioned her daughter making a cake that Julia makes in the movies where you press nuts in to the side of the cake. That's all I had to go on. So I read the the cake section (5 basic cakes takes up about 25 pages) and decided that Reine de Saba was the cake in question. 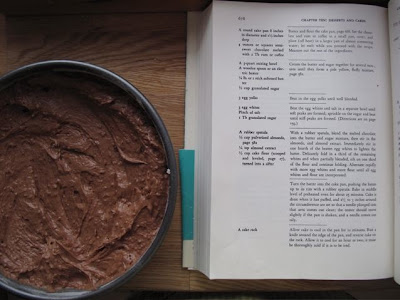 Nowhere does Julia Child tell you why it is named after the Queen of Sheba, but she does think of it is as a quintessential French Cake.  Me?  I'll just refer to it as chocolate and almond cake. I'll also refer to it as one of my favourite chocolate cakes ever.
Chocolate cake can come in many forms - uber moist, dense and flourless, simply chalky or dry, and sometimes perfectly lovely.  This one falls in the last category. Only a hint of almond touches the slightly creamy but rich texture. With ground almonds and whipped egg whites competing between grounding the cake and making it soar, it really lands somewhere in between in an earthly heaven made of chocolate. 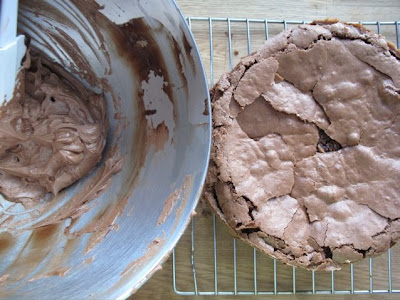 The cake itself isn't the last recipe in the book, it is the chocolate butter icing. Officially, this might be my new favourite icing.  It isn't sweet or terribly rich.  Good butter makes this icing because all it really is is melted chocolate with butter whipped in.  Not much fancier than that. Of course, the recipe makes it seem a lot fancier, but don't be fooled. And don't get lost in the instructions.
You should also not be fooled by the small amount of icing the recipe makes.  It seems like such a paltry amount, but it covers the cake and is a perfect compliment to the cake.  Next time I might use that last recipe as a filling, or a crumb coat on a cake I cover with ganache. Or, I'll just follow the recipe again and make The Queen of Sheba as intended. 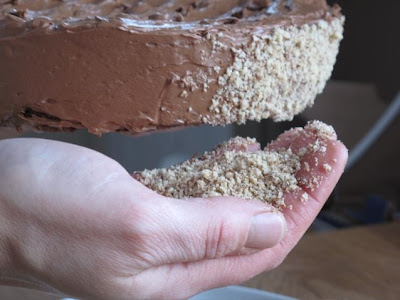 Cake decorating is not my forte. I sincerely hope that my girls NEVER ask for a themed cake because it will be a sad, sad birthday for them. I can, however, hold a cake and press ground almonds in to the side.  That is not difficult at all, but worth the mess. I strongly recommend that you do not skip this step. 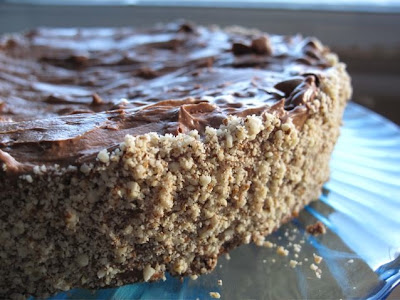 If I drank espresso it would have been a nice accompaniment.  My mind went to scotch. But after more than a few glasses of wine that night, all I could think about was whether it would be rude or not to take one of the last pieces and skip making my souffle.  Alas, Pierre and Gail's husband made the decision for me.  The souffle was good, but I am still thinking about the cake. I just might open the book to the last page and make it again for Christmas dinner.
Posted by Cheryl Arkison at Monday, December 14, 2009

Yum! I'll have to try it. The cake recipe reminds me of french macaroons which I love to make (and eat)...especially this time of year!

Cake or souffle? Cake, please! And Andrew will help you with the scotch.

What a wonderful way to end such a festive gathering. The cake looks heavenly and I'm in agreement about a nice glass of scotch to go with!

I see a lot of cakes with sliced almonds pressed to their sides, but I've never actually done it. You've inspired me to try!