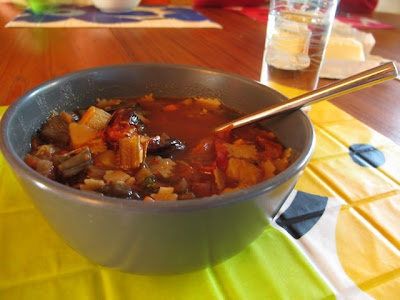 Sunday dinner this week was a victory on all fronts. The girls ate soup for dinner and Hubby ate zucchini without knowledge/complaint. Woohoo!
We spent the weekend in Edmonton, visiting family and taking in Alegria by Cirque de Soleil. Surprisingly, we got out of Edmonton at a decent hour so we were actually home to enjoy part of the afternoon. Unfortunately, a storm hit the second we arrived. There went the plan to take the dogs for a walk. So, it was into the kitchen instead.
Smilosaurus and I set to dealing with the two ridiculously large zucchinis we had from our CSA. Rather than go with the typical chocolate zucchini cake, I pulled up this recipe for zucchini cake with crunchy lemon glaze. We grated, we cracked eggs, we sifted, we stirred, we baked with the thunder as our soundtrack.
While the cake baked I had to figure out what the heck to eat for dinner. Standing in front of the deep freeze the last bits of last years summer - slow roasted tomatoes, chard, white beans were staring at me. So I grabbed some frozen stock, the veg, and set to make soup. Except that I didn't look so closely. I actually grabbed soup, not stock. So, dinner was souped up soup.
One of the soup additions was some leftover diced zucchini. And Hubby ate it and didn't complain. I realized when he told The Monster to eat her soup, and pointed out that it has potatoes in it, that he didn't have a clue he was eating zucchini.  Shh, no one tell him. 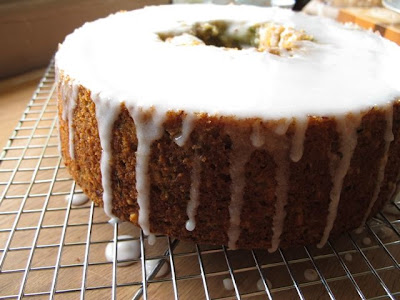 Your secret is safe with me.

Love the glaze on your cake. I'd eat it without complaint, but you never invite me over :-)

Where does one purchase tonka beans?