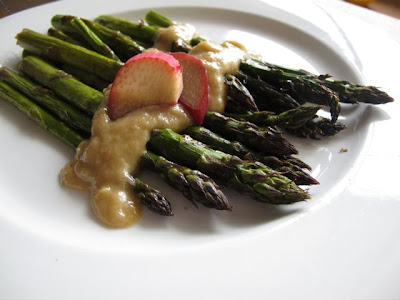 They say that when in doubt, cook foods together that grow together. As we trundled along on our tractor ride at the most recent Asparagus Festival I couldn't help but become obsessed with the idea of asparagus and rhubarb together. There they were, in neighbouring fields and sharing space in my Edgar Farms bag on the way home. They begged to be joined in holy cookery.
The only problem with this idea is that rhubarb, no matter how you cut it, is a rather tart thing. And asparagus is far more mellow and sweet. It isn't always a case for opposites attract. But when it doubt, throw them in a roasting pan together. A little spice, a little sweet and sweat, and beautiful things can happen.
Roasted asparagus, however, isn't that great to eat. The texture is rather, um... pasty with a side of string. Not giving up on this relationship, however, the rhubarb transformed when it became a sauce to slink over and envelope the roasted asparagus. It also did well when covering pork tenderloin, but I'm not telling you about that. The asparagus would be upset to know the rhubarb went behind his back. 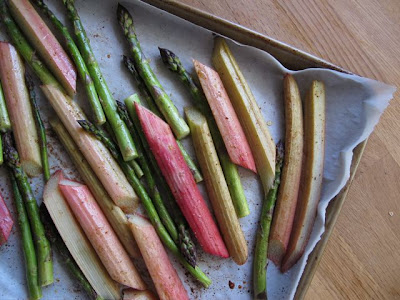 Neat. We just made a poached asparagus with rhubarb hollandaise for a dinner party we threw and it was really tasty.