3 hours.
My 3 year old sat at the table an hour for every year the other night. Just because she wouldn't drink her milk. And because we told her she couldn't leave the table until she did just that. 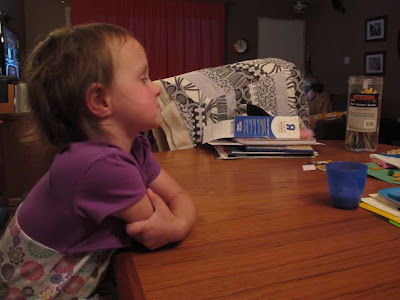 She cried, she took a bathroom break, she fussed, she tried to play, she desperately worked us for conversation and entertainment. We continued on with our evening - working, cleaning up, putting The Monster to bed (even though she couldn't sleep because she is quite used to her sister in the room), and I even made caramel corn. For 3 hours she sat there. At that point I subbed out the milk with a cold glass. She spilled that one. I cleaned it up and gave her another one. With a nonchalance that belied the battle of wills she simply picked it up and drank it.
Right now you either think we are cruel parents or are filled with admiration for our stick-to-it-ness. Or you think we're dumb. I'm going with all three myself.
A rule is a rule. We don't care if they don't eat all their dinner. As long as they've tried everything on their plate, they can eat as much or as little as they like. But they have to drink their milk. (Very lovely goat milk, I might add.)
As for us parents, our rule is that if we start down a path we don't cave. If the other says something we don't contradict. So even though we had a pile of things to do and actually needed the dining room table, we worked around her. It was exhausting, I'll admit. I'm proud of all of us for sticking to it. And the caramel corn went really nicely with a scotch once it was all over.
(I used this recipe, but subbed the syrup for maple syrup, added pecans instead of peanuts, and crumbled in some cooked bacon with the popcorn.)
And don't tell the kid, but I'm impressed with her. That stubborness will do her well as an adult, if she makes it there.
What are some of your dinnertime rules? What's the longest you've had to go to enforce a rule?
Posted by Cheryl Arkison at Wednesday, June 08, 2011

Ha... you're not alone. I think every house with kids has their battles including one like this. I try not to force my kids to eat anything I know they absolutely will not like but if it's normal things they like, they have to eat it... well 3yo anyway. 1yo is another story. Kind of hard to enforce a rule like that with someone so young. But 3yo has to sit at the table until she finishes. Her problem is that she talks and plays a lot while the rest of us eat. She'll learn.

We have a bit of the oposite problem, my three year old would rahter live on milk than eat food. So she is not allowed to drink her milk until she has eaten a bite of everything, even then she earns a sip of milk after each bite of dinner. Sometimes I really do wonder how she survives on the little she does eat. I will say, dinner time is no longer a relaxing enjoyable afair.

I think you are some of the best parents out there. So many times we see / hear of children that make the rules / decisions rather than the parents. We see parents let children do or not do things simply because they are tired and it is easier to give in – but what benefit does that do in the long run for the child and the parents?
Growing up I was a very picky eater, in a house with 3 other children and a rule that said you had to eat everything on your plate, my parents rule was a the same as yours, I remember sitting at the table long past everyone finishing, eating their dessert and leaving – but my parents implemented the timer rule – they got the kitchen egg times out – set it for a specific amount of time – and I had to be done my meal before the timer went off or.... well I honestly never found out what would happen – but I grew up in a house where I was spanked – so I am pretty sure it would have hurt – whatever the punishment would have been.
We have not been there yet with meal time, but we also have the same approach to parenting – once we have set out a rule – that is it – I will not back down. I carry through on all enforcement – because when you cave once, they know you will cave a second and third time if they just wait you out a little bit longer next time.
I admire you for sticking to your guns and ‘winning’ in the end.

My sister's kids had a habit of pouring themselves more cereal than they could or would eat in the morning. So she made a rule that if they didn't finish what they had served up, they'd have to finish it for lunch (or supper, if they didn't eat it at lunchtime) - sogginess and all. Gross, but it worked!

The biggest rule in our house besides the "no thank-you" bite is the serving rule. If someone serves you something you don't have to finish it after you have tried it, but anything you serve yourself must be finished even if it takes all night.

I grew up one of three and the only one who hated milk. I always had to drink it, too. As it turns out - the stuff makes me sick. Lactose intollerence was not commonly known back in the day... but it is now. There are lots of ways to get calcium (beans, greens, caltrate (as suggested by her doctor)... So for my 3 year old, when the dislike of milk came up, I went with it. She eats everything else and is healthy and strong. And, I prefer to not make a battle out of meals. That's not to say that I cave in, but I also don't make her sit at the table for 3 hours. But, she can either eat what is for dinner or not eat - she usually eats. And, she eats more foods than most 3 year olds that I know. The blog, Raising Healthy Eaters http://www.raisehealthyeaters.com/ has been a huge help on this front. Not to be judging you, as I know that every parent has a different style and every kid is different, but sometimes new ideas can help.

Our rule was that you eat ALL that's served. Our 6yo eats anything and everything with gusto. We do let her slide a bit if she can't finish. (usually a second helping) The other 2 are pickier but they have to finish what is in their plate even if it takes all night. A couple of times we had to save it for the next meal.
Growing up my dad had a rule that if we complained about not liking a certain dish, you get double portion. So we learned to keep quiet and finish what's in front of us.