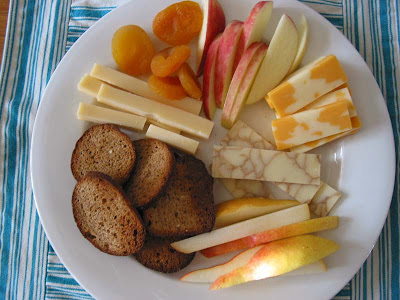 Have you been watching Saturday Night Live lately? Sarah Palin and Obama imitations aside (freakin' hilarious!) on Weekend Update they have a new segment called, "Oh My God, Are you Serious?" I've been saying that a lot lately when it comes to the Monster's food preferences.

Orange is one of my favourite colours. It favours heavily in the decorating in our house, I use it liberally in many quilt designs, and my favourite mug and second favourite purse are bold displays of the citrus tone. Apparently it is also one of the Monster's favourite. She, however, displays her propensity for the colour by only eating orange cheese. Oh my God, are you serious?

Our suspicions about this were confirmed a few weeks ago when she boldly stated that the cheddar on her plate for snack would not do because it was not, as she said, "lellow cheese." I knew that she wouldn't eat a hunk of mozza, nor a Babybel round, having defiantly turned her nose at these for months. But that aged cheddar was fantastic, plus she'd already eaten it in a quesadilla.

Still, I thought I would try an unscientific experiment on her, a cheese plate taste test if you will. At the market last week I stocked up on some gouda from Sylvan Star, a whisky cheddar from The Village Cheese Company, and some fantastic Honeycrisp apples and Bartlett pears. Along with some supermarket marble cheese, dried apricots, and a few bagel crisps my mom left behind we had ourselves a snack.

She went straight for the fruit. Okay, so maybe including the fruit skewed the experiment. But just a plate of cheese didn't seem like a good snack, plus I have to groom her for a trip to France...one day. It should be noted that the first fruit she ate were the dried apricots, shockingly orange.

The volume of choices did her excited, not overwhelmed. Everything was picked up, and usually licked. Oh my God, are you serious? And all was put down, except the supermarket marble cheese. She almost took a bite of the crackled whiskey cheddar, but thought better of it. Brown is not orange.

Seeing as this wasn't a formal focus group and I resisted the urge to question her choices I can only come to one conclusion: she's weird. That, or she's just a toddler.

I did leave out her favourite cheese - feta. A salty sheep's feta is her hands down cheese of choice. If that is an option she will eat nothing else. Knowing that, I left it out so as to avoid skewing the results. Feta is white, or at best, cream. Oh my god, are you serious?