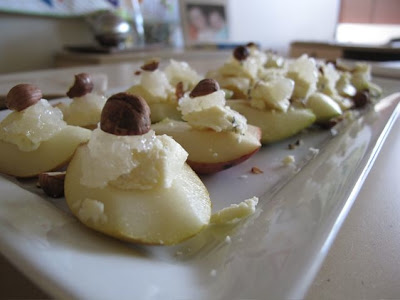 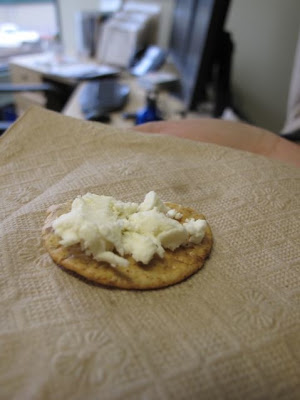 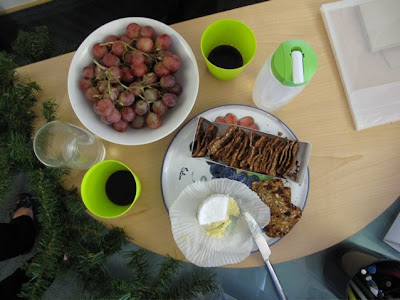 And, of course, there was just a teeny bit of wine. Served in our glorious reusable plastic cups.
Posted by Cheryl Arkison at Thursday, November 26, 2009 7 comments:

Back when I was full of energy and vigor and swiss chard I entered my Frico recipe in the Safeway Cheese Champions contest. To be honest, I saw the ad on Facebook and was bored.  Yup, I actually noticed the ad, that's how bored I was.
So I entered and found out recently that I won something.  Sadly, it was not the grand prize.  That means no Mama/Daddy time in Lake Louise for free.  But I did get a grocery gift card and it will buy our dairy for a couple of weeks. No complaints there.
And, if you are in a Safeway in the coming weeks, probably only in Western Canada, pick up the Safeway Cheese Champions book.  You will find my recipe and more in there. Oh, and a teeny tiny picture of me and The Monster.
Posted by Cheryl Arkison at Sunday, November 22, 2009 5 comments: 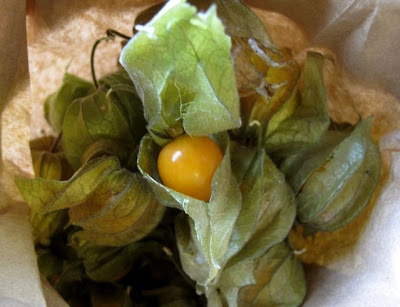 After a very busy morning gluing brown circles to bigger brown circles, building floor puzzles of cats, and dancing to a jazzy version of Spiderman it was time to settle down for snacks. It was our day to volunteer at preschool. As the parent volunteer responsibilities include directing the craft, helping the teacher with all the regular tasks, and cleaning up at the end of the class. Our kid gets to be VIP that day, getting to go first for all activities and bringing something special for show and tell. Oh, and the parent gets the pleasure of bringing a snack.
Now, it should be painfully clear by now that I'm not the apple slice and snack pack kind of mom. I bake cookies and muffins when they ask me to. I don't bring juice for other people's kids. And when it is our turn to bring a snack I think it is a great idea to bring something likely foreign to the average Canadian three year old, like a cape gooseberry. I wonder what the other parents thought when they saw our snack reported on the calendar.
(A total aside, but don't you think having to record you snack is just another form of competitive parenting? Remind me to ask the teacher about that.)
A cape gooseberry isn't a common fruit. I always associate it with hotel fruit trays at meetings. Their distinctive papery coverings serve more as garnish to most of us. But peel that back and taste the sweetly sour fruit with the hint of sunshine. It's kind of like a natural version of sour gummy candy, minus the jelly texture. Personally, I love them. But I wasn't sure about the kids.
I baked cookies as a fall back position.
The cape gooseberries? They went over surprisingly well. In a class of eight kids one outright refused to even have the gooseberry in his bowl, stopping just short of a complete fit over the fact that it even touched his cookies. A couple more sniffed it and merely set it aside. Two more had to be cajoled... er, encouraged to try the fruit. And three happily tried them. One kept asking for more and more, leaving his cookies aside. Way to go kid!
My kid tried hers, declared it too sour, and returned to her cookies.
The kid that loved them?  His dad is a chef.
Posted by Cheryl Arkison at Thursday, November 12, 2009 6 comments: 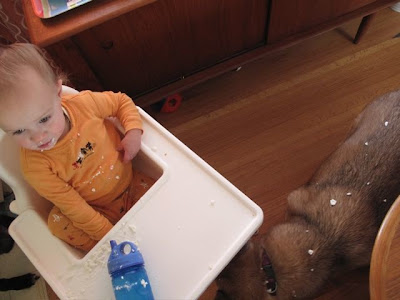 I have a desire to make my own cottage cheese one of these days, just like my Baba used to. That won't be happening until Smilosaurus learns to keep it on the high chair tray, at least, instead of decorating the dog. The worst part is that we usually rely on the dogs to clean up after she eats.  What am I supposed to do when this happens?
Posted by Cheryl Arkison at Sunday, November 08, 2009 10 comments: