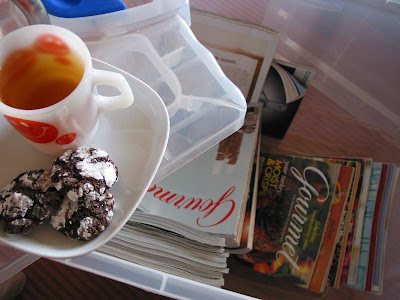 Gasp! I gave away 3 bins of magazines this week. That's 10 years of Gourmet, Food and Wine, Cooking Light, Bon Appetit, and Martha Stewart. I must be crazy. Or a little under the gun to get the basement cleaned out so we can develop it. And I have to thank my sister-in-law and mother-in-law for really giving me the ass-kicking needed to do it.


These magazines represent my first forays and my development as a foodie. I can still remember reading my very first issue of Gourmet, April 1994. I was finishing my second year of undergrad in Halifax. My part-time job was with a caterer - cooking and selling food in a fancy mall food court. I picked up the mag at The Daily Grind and walked to the Public Gardens. Settled on a bench near one of the ponds I opened that magazine and took my first steps into fancy food, dreamy travels, and inspirational writing and photography. I started to revise my educational plans, thinking about cooking school after undergrad. Most importantly, they helped me learn to taste and to really cook.


I'd grown up watching the Frugal Gourmet, Wok with Chan, and Biba's Italian Kitchen on Saturday afternoons - in between Wide World of Sports and napping. With my Ukrainian roots food, homemade rich food, was central to our daily lives. But I was a picky eater, and showed no interest in being in the kitchen other than to bake cookies. Something changed with that first issue. I devoured more and cooked as much as my limited student budget and roommates would allow. I started going to the farmers market on Saturdays, bringing home what fit in my backpack because the walk was too long for more. Food became a means to pleasure, not just a means to an end.


Reading the magazines has been a ritualistic pleasure in and of itself. A lazy Saturday afternoon meant getting through one or two issues, cover to cover, no skipping ahead. Sundays in the summer found Hubby and I curled up on the thrift store couch on the porch of the blue house, beers at our side, and magazines in hand. Road trips, unless they took us through mountain passes, found me reading out interesting (at least to me) foodbits to Hubby while he drove.


Hubby has been bugging me for years - basically all the years we've been together - to cull the herd. The first place we lived together came with roommates. My magazines were proudly displayed on a large bookshelf in the dining room. When I felt like something new or something I recalled seeing I would pull issue after issue off the shelves and sip tea at the dining room table, enjoying my search. One roommate even made a joke of it, sitting down with boyfriend to observe me - like Lorne Greene and National Geographic - when I was searching for a particular pancake recipe.

The move to Calgary five years ago left my magazines languishing in bins in the basement. There was simply no room for them in our little bungalow. I found that I hardly ever went to them, turning to the computer instead for recipes and additional inspiration. The new magazines are still here, still taking me to the kitchen and feeding my soul when I have a moment. There are no luxurious afternoons of reading anymore. Rather, I sneak a few pages in here and there, often when the Monster and I are eating meals when Hubby is out of town. She now wants to read recipes with with me. 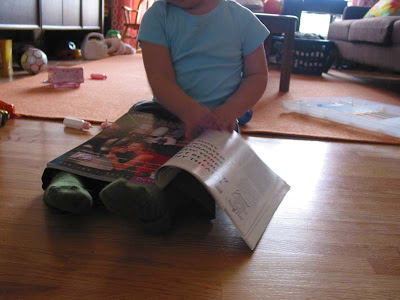 As I went through the bins and sorted the magazines for the lucky recipient I found myself reminiscing about a particular roadtrip to a wedding on the West Coast where I read the September 2002 Gourmet. Or the Bon Appetit about the Mediterranean Islands that I read and reread on our honeymoon in Cuba. Or the conversation with an oyster shucker over Hubby's 27th birthday dinner in Toronto, about whether we thought Ruth Reichl was doing a good job with Gourmet (yes!).

These magazines are my history. My history as a foodie. My history as an adult, really. It was hard to give them away. But I have look forward, find some new inspiration. I did that even while I was saying goodbye, enjoying a recipe I found from a new friend and resource, and the lucky recipient.


Here's to the next ten years! And some good storage in the new basement.
Posted by Cheryl Arkison at Sunday, November 02, 2008

I have been remiss in visiting your blog lately... it has been crazy busy! I just loved this post. It was such an insight into your thoughts and feelings. I read your comment today on my blog, and yes, you do need to come for a visit some day and we'll walk or ride... whatever we feel like.

Good for you for cleaning house! With Epicurious having most of the gourmet and bon appetit recipes on line, you don't need a dead forest in your house.

I do like your story about your first copy of gourmet. Did you keep that one special issue as a momento or toss it to the curb?

You are stronger than I am. I could never do that! Looks like you had a sweet collection. I agree there is hardly anytime to read anymore, though.

WOW. I am proud of you. I wish I could extricate myself from my piles of Bon Apetit, Gourmet, Fine Cooking, Martha...

What a beautiful post ... and good for you for managing to recycle all of them. You made me miss Halifax a little bit - I was born there and went to school there as well - I love the Daily Grind, the Public Gardens and the Farmers Market! I'm living in Edmonton now and enjoying discovering everything food about this city. I also just ordered a subscription to Gourmet that I'm hoping will start next month!

Have I thanked you enough for these lovely bins of magazines?
Mike especially thanks you...