It Must be the Ukrainian in Her 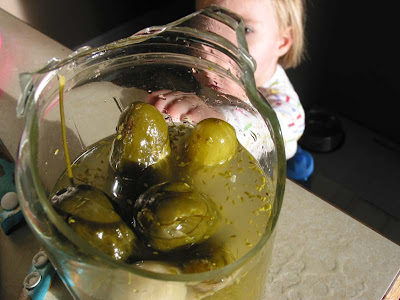 There are a million lists that circulate through inboxes that start with, "You know you are X when..." I must admit that I can identify with the ones that refer to children of the 80s, Ukrainians, and quilters. But nowhere on the list about Ukrainians does it mention wanting pickles for breakfast.

Mornings in our house are lazy affairs, what with me on mat leave and Hubby self-employed and not a morning person. The Monster wakes up, steals a few snuggles, aggravates her sister and sits down with a handful of raisins and Zaboomafoo while I nurse Little Miss Sunshine. Once the little one is fed I make myself some tea and try to convince the Monster to eat some breakfast. Like her Dad, she isn't much for eating early in the day.

Well, one day last week she made the particularly unique request for pickles for breakfast.

We had a jar sitting on the counter, waiting for Hubby to open. When my parents make pickles and my dad does up the jars with his beefy construction worker hands a special gravity is enabled, one that holds the lids on with particular force. Of course, old lids don't help and being the frugal Ukrainian that he is, he won't replace the jars. Opening his jars is a two person, hot water, wooden spoon, and damp cloth job.

So that morning Hubby and I tried struggled. We rinsed, we banged, we grunted, we braced ourselves and turned. Nothing was working. Hubby finally felt some movement so tried that extra bit harder. I could hear the crack in the other room. The lid came off - with the top of the jar. Definitely time to replace the jars, Dad. 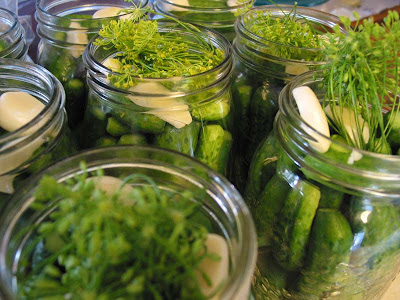 After the Monster got over the shock of the noise and the short-lived drama of thinking she wasn't going to get any pickles, we opened one of the jars that my mom and I made while our playhouse was being built. The Monster got her breakfast of three little pickles, and a bit of cheese too. Off to daycare a happy little Ukrainian. Well, half Ukrainian with garlic breath.
Posted by Cheryl Arkison at Friday, December 12, 2008

Ha ha! Sounds as though she and my girl would get along great--check out this post: http://therovinglemon.blogspot.com/2008/11/genetic-encoding.html

A Calgarian that makes pickles! I have questions!

1) where do you get dill flowers? (do you grow them or buy them somewhere?)

2) I noticed with my first kick at canning this summer the lids are on so tight we have to use a bottle opener to get them open.. does that mean I am processing them too long?

hmm, I may be obsessed..

Ha, I LOVE pickles for breakfast. As long as they are dill. So, your post inspired me to look up a list of "You know you are Ukranian when..." and I actually identified with around five of the qualities. I'm not Ukranian. At least, I think I'm not.

Anyway, the list really reminded me of my grandma! Memories...