The Princess and the Pea Mama 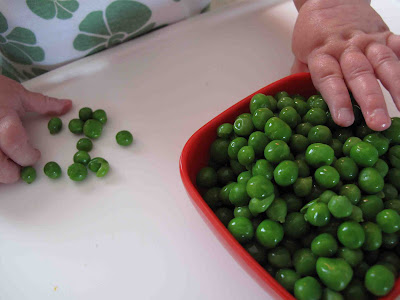 Growing up I never ate lima beans, lamb, or lobster.  I never ate peppers, raw tomatoes, liver, broccoli tops, cauliflower, and peas either.   In the case of the latter, it was because I thought they were disgusting.  I never ate the former items because my mom didn't like them.  If she didn't like them we didn't eat them.  I'm with her on the lima beans, but I sure missed out of lamb and lobster.  Hmm, maybe she just hated food that started with the letter "L"?
I'm doing my damnedest to not do that to the girls.  Of all the foods I hated as I child I now eat almost all of them, except peas.  Peas are seriously the most vile things on the planet.  They stink and they taste like mud.  Eating a pea is akin to popping a bubble filled with mushy sewage.
Hubby likens me to The Princess and the Pea, except that I can tell that there is one pea in an entire dish of shepherd's pie.  Or that the samosas do indeed come with peas without even opening one.  Okay, the last one is generally a given.  But the foul odour of peas is distinct and I can pick it up despite pastry or potato coverings.
As I said, though, I am trying not to pass on that dislike to the girls.  I plug my nose when I defrost the frozen peas, scrub my hands with smelly soaps when we go pea picking, and make Hubby feed Smilosaurus dinner if peas are on the menu.  So far I've been successful, both girls love peas.  The Monster will eat them fresh or frozen, raw or cooked.  And Smilosaurus practices her pincer grasp at least once a week with a bowl full of peas.  Good for them.
But they better not ask me to make split pea soup, ever.
Posted by Cheryl Arkison at Tuesday, February 24, 2009

My mom doesn't cook things that she doesn't like either, and has been known to say things like, "Nobody likes them" about foods like Brussels sprouts and beets even though no one else in my family has tried them. She also tries to pass off her own likes as the likes of other people, which is why something fried always gets ordered at dim sum.

Hilarious, thanks for the laugh! This post might just as well have been written by my husband. Peas are the only food in the world he cannot abide ... yet, oddly, he enjoys pea soup. Go figure! I happen to love peas, but never make them because he won't eat them.