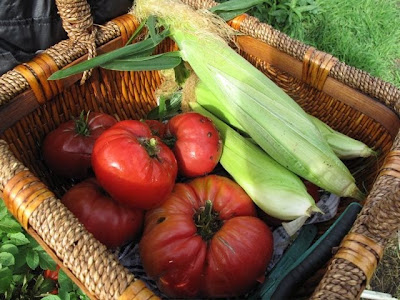 I’ve had a mild obsession with tomatoe marmalade since out weekend in the Okanagan.  After our trip to the market the clouds broke and we ventured to the aptly named community of Summerland.  There we drove up the mountain to the colourful Valentine Farm.  Our hosts, Kim Stansfield and John Gordon, met us in the yard of their compact property, next to their fantastic home and guest house. 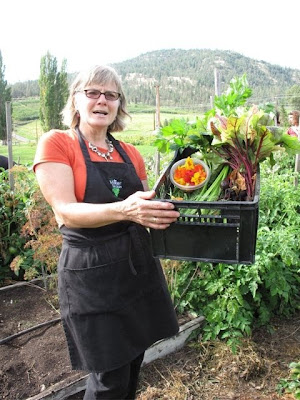 After introductions we gathered our lunch from the generous garden of Kim and John, under the watchful eye of an odd looking llama, a couple of horses, and a friendly guard dog names Asta.  We picked a half dozen types of greens, beets, radish pods, corn, flowers, and lots of tomatoes (minus the ones Hubby scarfed while picking). 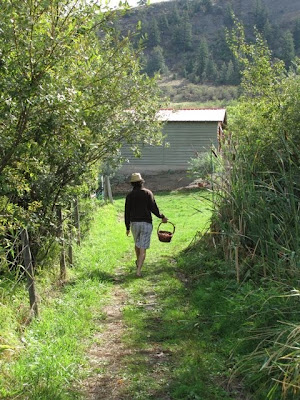 Kim and John are more than mere gardeners.  They are grape growers too.  But unlike every other wine maker or grape grower in the region who fears their wine spoiling), Kim and John intentionally infect their wine with acetic acid to turn it into a pungent and flavourful vinegar John showed us their small production facility (a very nice looking and obsessively clean garage) then set to finishing our lunch in the outdoor, wood-fired oven. 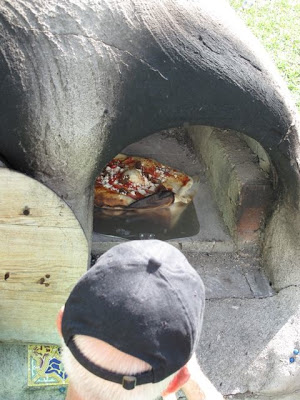 Our gathered items made their way into the most diverse salad I've ever had, dressed, of course, with Vinegar Works organic vinegar. We were also served a large platter of sliced heirloom tomatoes reminiscent of a sunrise.  Smaller tomatoes made their way on to the wood fired pizzas. 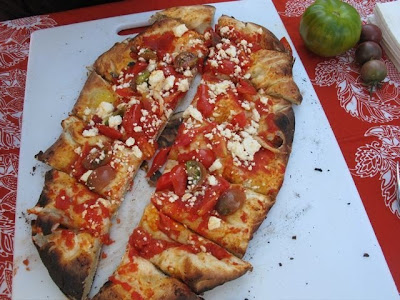 Oh, the pizzas.  The most tender yet crispy and somehow bulbous crust (yes, all at the same time) covered with tomatoes, sometimes chard, feta, and my newfound obsession: tomatoe marmalade. Can I just say I will never made a pizza without tomatoe marmalade ever again?  I would love to say that I will only ever eat pizza from a wood-fired backyard oven, but I don't live in Summerland or here to make that happen. But so long as I can hit 450 degrees F on m home oven I will be using this as my sauce.
So when my mother-in-law showed up with 20 pounds of Romas last week I set to work. The girls helped as much as it held their interest.  For Smilosaurus this meant transferring tomatoes from the box to the sink for washing, sampling along the way. She also had a special job of stealing the cloth for cleaning the jars. For The Monster helping meant transferring blanched tomatoes to the ice water, stirring the marmalade as it cooked, and helping label the finished jars. See, you can can with kids underfoot. Okay, it helps if your mother-in-law is around for bike rides and swing pushes when it gets a little boring for the little ones. 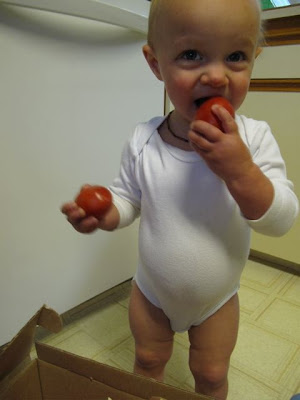 This marmalade sweet and just a little bit spicy.  It sets about as much as a runny jam.  I'm saving mine for pizza, but The Monster has already claimed some for dipping fresh bread.  It isn't Kim Stansfield's recipe, but I think it is nearly as good.  Then again, I'm not sure I could ever recreate that lunch and the taste of sunshine in every bite of our meal. 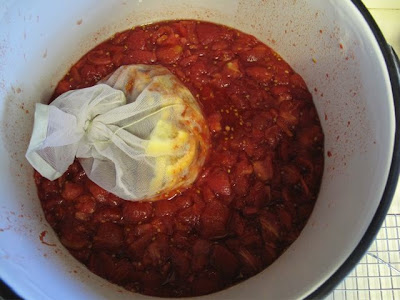 Tomatoe Marmalade
(makes 7-9 250 mL jars)
12 cups peeled, chopped tomatoes (drained of liquid)
9 cups sugar
1 orange, thinly sliced
1 lemon, thinly sliced
1 tablespoon whole cloves
6 cinnamon sticks
1 teaspoon fennel seeds
1 tablespoon coriander seeds
2 green cardamon pods
1. Mix the tomatoes and sugar together in a large pot. Place the remaining ingredients in a bag made from cheesecloth.  Put the cheesecloth bag and tomatoes together in a large pot and set on the stove.
2.  Bring to a strong simmer and cook for 45-60 minutes, until mixture thickens and the juices are syrupy.  Test for gel by placing a plate in the freezer.  When the plate is cold place a spoonful of the marmalade on the the plate and replace the plate in the freezer.  After a few minutes, run your fingernail through the marmalade.  If it doesn't immediately fill the space left by your finger it is ready.  If the liquid runs back on itself cook the marmalade for another few minutes.  Test again.
3.  Meanwhile, wash and sterilize your jars, lids, and screw tops in boiling water. Keep the jars hot until ready to use.
4.  When the marmalade is ready fill the jars to 1/2 inch from the top.  Wipe the rims clean with a hot, clean cloth.  Top with the lids and screw tops.
5.  Process in a boiling water bath for 10 minutes (start timing once the water has returned to the boil after adding the filled jars). Freeze or immediately use any jars that don't seal. 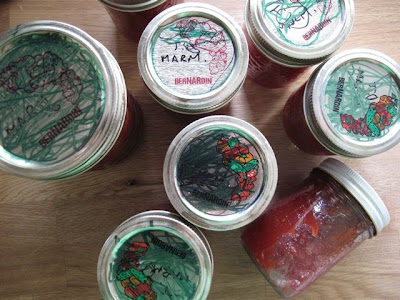 That pizza (and marmalade) was SO GOOD. Definitely ranked up there with best pizzas of my life. The entire meal was up there, actually! I'm still enjoying their vinegar, too.

This pizza looks great and I love the pictures.

Oh man that pizza looks so good. I use to bake in a wood fired oven that fit 60 2# loaves. We use to love to pop in a pizza for lunch.

I am making that marmalade tomorrow! Thanks for the recipe and taking me back to that day at Summerland. I have 3 peach boxes full of tomatoes. I may even put it on a pizza.

Hi Cheryl! Fantastic blog, thank you for finding me on twtter - now I have a new one to follow and recipes to try...

How ARE YOU?! I think there's an old message on FB somewhere? I'll check it and get in touch.

Danny and I have a not-so-secret dream to build a brick pizza oven on our next property. Imagine??

ack! wish I had seen this when we were still getting excellent tomatoes...will have to bookmark for our next season!

also, can you please send me that baby FedEx? I need a snuggle.