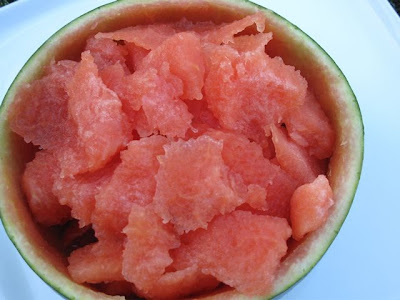 I refuse to give up yet.  Despite the fact that we nearly had frost the last two nights here in the city, despite the fact that it is already dark when the girls go the bed and the sun was almost eerily autumn-like at the park today, and despite the fact that yes, the leaves are starting to fall off the tree I refuse to accept than summer is over.  At least when it comes to my food.  So I'm still eating peaches and watermelon. I will grill burgers until my fingers freeze.  And I will still serve my kids ice cream for dinner.
We picked up this watermelon on the weekend.  With rind so dark that it looked like it was buried in the forest when it grew. And when we cut it open it was sweet and seedy.  I actually had to look it up, but did you know that a watermelon is in the same family as squashes and gourds?  The cut fruit reminded me of a squash, with ropy strands of flesh combining in a pulpy mass of seeds in the center of the fruit.  We scooped out the seeds rather than cut around them and were left with an inch of the most watermelon tasting watermelon I've ever had. I'm kicking myself that I didn't take note of the variety.
Aside from cutting slices and eating the watermelon straight - which the girls love - I prepared this watermelon the easiest way I know.  I made a milkshake.  Yeah, I said it, a watermelon milkshake. 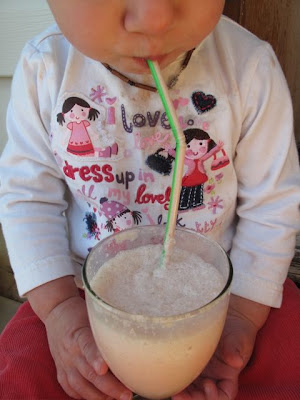 In my house growing up we had the choice of two summer desserts - a raspberry milkshake and a watermelon milkshake. (Maybe a banana one if there happened to be a banana left behind in a house of three competitive swimmers.) Watermelon milkshakes were my personal favourite. Yet, whenever I mentioned it to friends they all got grossed out.  Like seriously grossed out.  I never understood that. What's wrong with creamy watermelon?  And really, that's what a watermelon milkshake tastes like. And there is nothing, absolutely nothing wrong with that.
It turns out the palest of pink.  A mix of equal parts watermelon puree and vanilla ice cream. That's it. Resist the urge to add more ice cream to make a thick milkshake, you will lose the balance of sweetness and fresh taste from the watermelon. 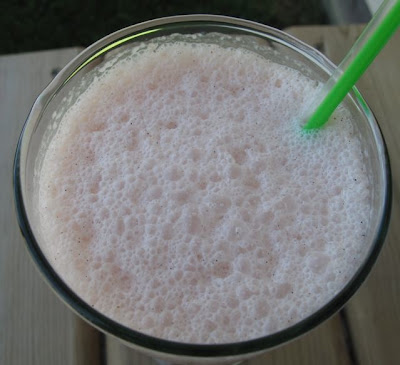 Oh yeah, and I fed it to my kids for dinner tonight.  Sadly, they only had a few sips and moved on to bread and baked beans.
Posted by Cheryl Arkison at Tuesday, September 08, 2009

I promise not to judge you, but it would never occur to me to pair watermelon and ice cream. And yet, why? I judge myself.

And I just love that picture of your daughter.

I'm in denial about the end of summer, too. I'll join you in a contest to see who can keep it up the longest. Game?

Linked from Under The High Chair. Live in Texas and am tired of summer-miss my Intermountain West autumn. Love your blog.