It all started with a few turnips. After a number of attempts last summer to like the turnips we got in our CSA delivery I was looking for another way to try them. Gail gave me the motivation after she shared what she did with our CSA delivery. And the weather has made a decided turn towards fall, being chilly and rainy today. A perfect day to have the oven on all day, with meat slowly cooking inside.

In short, a perfect day to make stew. And this is how I did it. 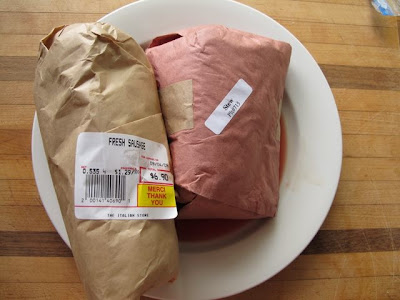 Get some meat. My entire family purchased a cow this summer. Well, my parents bought it and shared it with all of us. (Thanks!) So the beef stew meat came from that cow. And somehow I thought to defrost Italian sausage with it. Not sure why, but it paid off. And I was lucky, our butcher cut the meat into chunks for us. 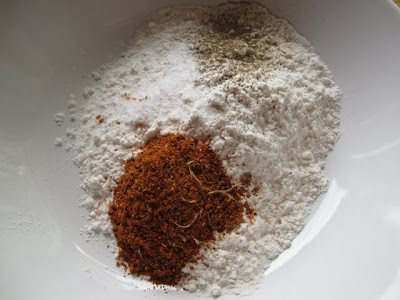 Spoon a couple of tablespoons of flour in a bowl.  Season it with salt and pepper. Today I also added some ground Ethiopian Berbere spices I have. Go with what you've got. Sometimes it is thyme and oregano, sometimes paprika, sometimes it is nothing. Stir it all together. 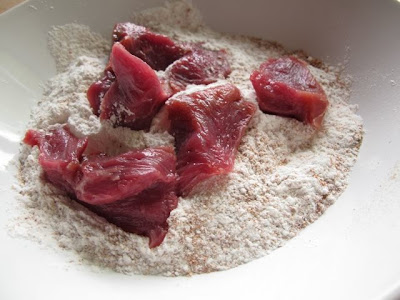 Toss your meat in the flour and spices to get well coated. Do it a handful at a time. About as much will fit in your pot without crowding. Make sure all sides are coated. Not only does this help the meat brown, but as the stew cooks, the flour helps thicken the sauce. 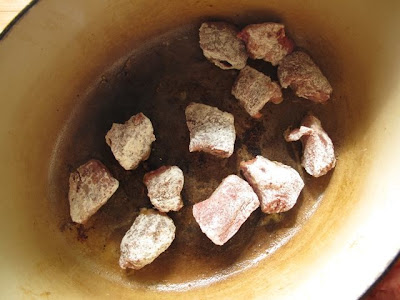 Heat up some olive oil or vegetable oil in the pot you will use to cook the stew. For this, I always turn to my trusty dutch oven. In small batches, so the meat isn't crowded, brown the pieces of meat. Most recipes will say to brown on all sides, but some of my pieces were more rhomboid than rectangular. Quite frankly, I can't be bothered to turn my meat 6 or 7 times. So as long as the big sides had colour I was happy. 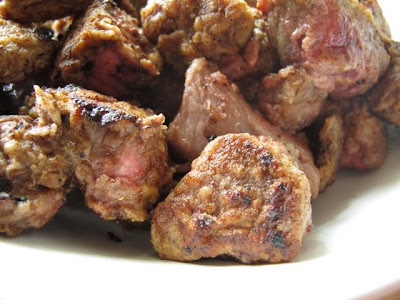 As your meat browns, put it in a bowl. That way, if any juices run out you capture them. 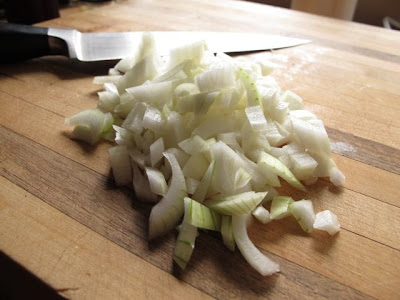 While your meat is browning, chop up an onion or two. How much depends on the size of onion and how much onion you actually want in the stew. I also chopped up some garlic, roughly. 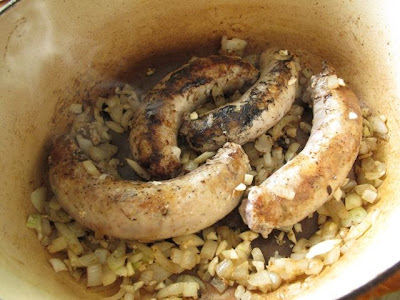 Because I'd defrosted them, I decided to add the sausage. And because I was lazy, I cooked them whole in the stew. (When I added the veggies later I took the sausages out, sliced them, then tossed them back in with everything else. It beat taking them apart raw.) At this point I browned the sausages and softened the onions and garlic. This is all still in the same pot I where I browned the beef. 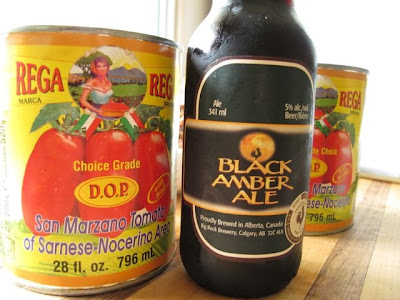 By now you can see that stew is about layering flavour. The next step is to deglaze the pan. More than anything I use beer, but sometimes wine. This beer was leftover from a party we had the other night. So I took a sip from the beer, then poured the rest in the pot. When you add alcohol to a hot pan it bubbles wildly and with a few scrapes of the wooden spoon, all those brown bits that look like burnt stuff came off the pot and to flavour the liquid. To this I added two cans of tomatoes. Not the juice, just the tomatoes. And I squished them in my hands as I added them. After that, the meat goes back in the pan, with any accumulated juices. Then the whole thing goes in the oven at 200 or 250 degrees F for a few hours. Yes, hours. You could also cook it on the stove, but I find the oven requires less attention. And frankly, stew is supposed to be about hands off cooking. Well, once you do all the stuff before this step. 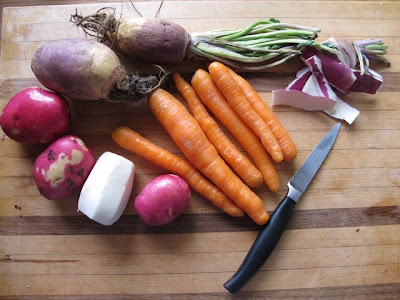 After a few hours it was time to add the veg. You could add it all at the same time, when you first put it in the oven. Perhaps, though, you need to go to the farmers' market and pick up the carrots and potatoes because all you have are turnips in the house. 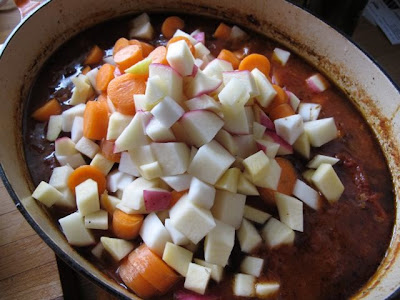 Cut all the veg into about the same size - 1/2 to 1 inch pieces. Throw them in the pot and let it all cook for a few hours more. At some point you should taste and season it. To mine I added some dried thyme as well as salt and pepper. 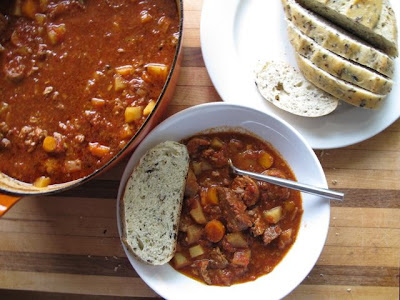 When Hubby and I first started dating we actually argued over the best way to eat stew. I was firmly in the with bread camp, and he preferred his over rice. Well, the day he makes the stew he can have it over rice. Today we had it with a loaf of wild rice and green onion bread from The Bakery at the Market. It was a fantastic compliment. 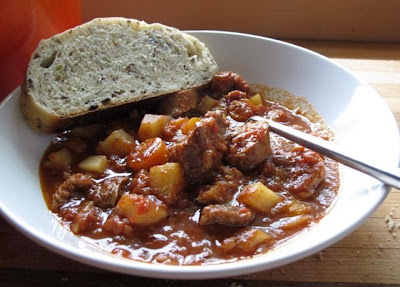 The stew was gently flavoured, with perfectly cooked meat that even my 2 year old could cut with her spoon. The sausage lent a sweetness and another texture. And the turnips? They softened slightly sweet, with just a touch of peppery bite. Just different enough from the potatoes, and about the best way I've ever had a turnip.
Posted by Cheryl Arkison at Sunday, August 29, 2010

you are making me drool sounds so yummy. let me know if you want a turnip casserole recipe using havarti cheese and cream...

Bookmarked for fall...yum! And I love that you used beer.

We must never show this recipe to my husband. He'd eat the whole thing himself.