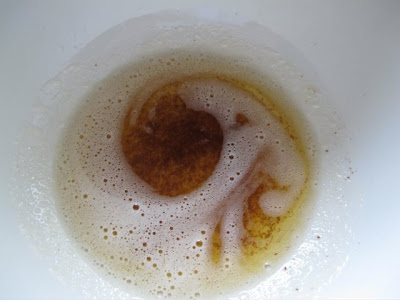 After finishing 5 articles in a week (recipe testing included) and single parenting for most of that time, frankly, I didn't care much for Sunday dinner. The fridge was full of food, the girls spent the afternoon munching on late season strawberries, cheese, and a cantaloupe, and we were all getting downright cranky.
That left only one option for dinner - popcorn. 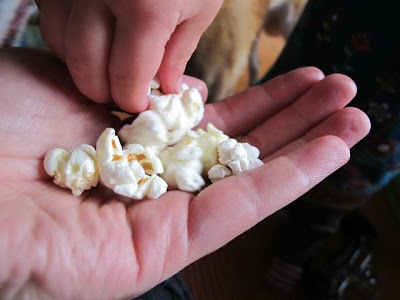 When I told the Monster that we were having popcorn and I would find us a movie to watch she got so excited that she literally burst into song. Then, on her own volition, she start cleaning up the living room to make it ready for dinner at the coffee table. Hell, if that's what it takes I'm thinking dinner like this everyday!
Not all was lost when it comes to a good Sunday dinner though. When we returned from the market and I went to refresh the fruit bowl I had some mealy peaches and sad looking apples and pears to contend with. Then there were the ripe peaches that didn't make it home intact from the market and a few half eaten apples courtesy of the girls. The only option was to make a fruit crisp.
The girls got grains and fruit for dinner. I am not a bad mom.
While cutting up the fruit (just a pile of what we had, peels and all) I had this notion to try browning the butter to the crisp first. I guess some part of me was still able to be creative. The butter melted and crackled away on the stove. Then it occurred to me that I never really know how brown is technically browned butter. Turns out I've not been browning enough all along. So I kept it on the stove and got to the lovely browned bits. 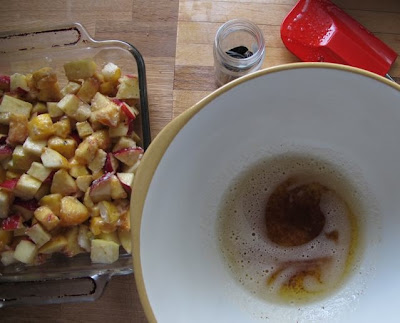 In the end, I could have left it a bit longer, I think, but it had that rich, nutty smell and some good colour. Even though I was making crisp, I must confess that the smell only made me think of lobster. I must still have Nova Scotia on the brain.
Once the butter cooled a bit I made up my regular crisp topping. Frankly, I could have eaten it straight, and did so for a few nibbles. It was rich with a butterscotch goodness and with a slightly lighter texture from using melted butter. I am never making crisp any other way, ever again.
And I refuse to feel bad about taking the time to treat the girls and sit quietly in front of the TV. Roasts and veggies are nice and all, but Sunday is also about family. After such a hectic and trying week sitting down together, this time with snuggles, was a much better option. 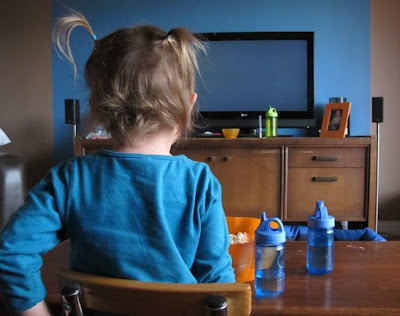 Browned Butter Fruit Crisp
Filling
4 cups fruit
2 tbsp brown sugar
2 tbsp flour
1 Tonka Bean/1 tsp cinnamon
Topping
1/2 cup butter
1/2 cup brown sugar
1/2 cup flour
1 cup rolled oats
1. Chop the fruit into 1/2 inch chunks. Peeling is optional. Gently toss with flour, brown sugar, and spice. Pour into an 8 by 8 baking dish.
2. Preheat oven to 350 degrees F.
3. In a small, stainless steel pot on medium low heat melt the butter. Then let it cook , swirling the pot every now and then, until it turns brown. As the colour starts to come to it, watch it closely. It can burn quickly.
4. Once the butter is browned nicely, pour it into your mixing bowl and let cool a few minutes. Admire the colour and dream of lobster. Then add in the brown sugar and stir. Once combined add the flour and oats.
5. Crumble on top of your prepared fruit, trying not to snitch too much along the way.
6. Bake for 30-40 minutes until the topping is crisp and more than golden and filling is bubbling.
Posted by Cheryl Arkison at Monday, October 04, 2010

I have to agree browning butter takes a while to get used to - especially when your afraid of burning it for real.
When its done right its amazing!
Thank you for sharing the recipe!

1. Popcorn is a whole grain, therefore, with the fruit, dinner was nutritionally complex.

2. This doesn't even register on the scale of Bad Things You Could Do While Solo Parenting.

oooh! This is right up my alley. A wonderful comfort food!!!

there is nothing wrong with popcorn for dinner! also, brown butter is wonderful in pretty much everything. go mom :)

Mmm...sounds like a yummy dinner. And can I just say that I love your blue wall. How fun and colourful!