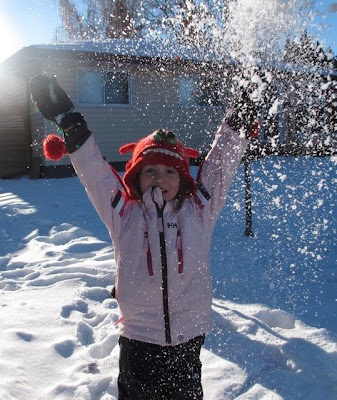 As I've told you before our dinner conversation is quite often nothing by Daddy and I constantly reminded the girls to stop singing/talking/playing with the forks and start eating. Tonight, however, was different.
The Monster started skiing lessons this morning. We were a bit worried because she has a tendency to be uber frustrated when she can't do something perfectly the first time she tries. Skiing is apparently another story. She loves it so much it wore out her entire body, as she told us.
Dinner conversation tonight was minimal until she'd scarfed down her brisket, broccoli, and last minute request of beets and blood oranges. (Yes, dinner was brought to us by the Letter B.) While we waited for her sister to finish the conversation turned to friction. Some days it's fart jokes, some days it is University level physics.
Hubby and The Monster are discussing friction and how it allows for movement. He launches into a lesson on the difference between static and dynamic friction. And she totally gets it. Scary. At the end of dinner she starts pulling on his arm and this conversation happens:
Hubby: You can't pull me because I have a higher coefficient of static friction.
The Monster: Oh yeah? Well I have superhero friction.
Hubby: What's that?
The Monster: Superhero friction lets me push off and fly.
That's when I served the brownies. 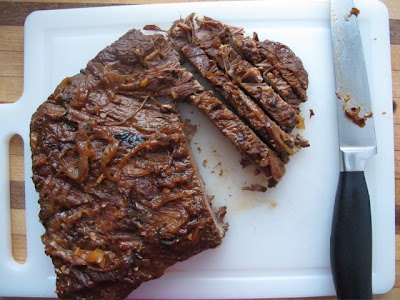 Slow Cooked Maple Cider Brisket
This recipe is adapted from the Edible cookbook. The meat itself was a gorgeous cut from Hoven Farms, but not quite as big as the recipe called for, so I played with it a bit. To be honest, I've never cooked a brisket before. I will be adding it to the regular repertoire from now on. Fantastic! Fork tender, with this almost sweet and sour sauce, this brisket was perfect for this cold, snowy day and a table full of hungry bellies. It served all of us and there is enough left for another family dinner.
1 large red onion
1 tbsp bacon drippings
5 cloves garlic
2 1/2 pound beef brisket
1 tbsp kosher salt
1 tsp dried oregano
1/2 tsp fresh ground black pepper
1/4 tsp chili powder
1 tbsp tomato sauce
1 cup strong brewed tea (original recipe called for coffee, but I had none)
1/2 cup apple cider vinegar
1/2 cup maple syrup
1/4 water or chicken broth
1 tbsp dijon mustard
1. Slice the onion in half then cut into crosswise strips. Heat the bacon drippings in an oven proof pan with a tight fitting lid. Cook the onion for 5-6 minutes until soft and lightly golden.
2. While the onions are cooking, finely chop 3 cloves of garlic and thinly slice the remaining two cloves. With a sharp knife cut slits all over the brisket. Poke the garlic slices into the slits. Set the brisket aside for the time being.
3. Preheat the oven to 350 degrees F.
4. When the onions are soft and golden stir in the garlic, salt, oregano, pepper, and chili powder. Cook for 1 minutes. Add the tomato sauce, tea/coffee, vinegar, maple syrup, water/stock, and mustard. Bring to a boil.
5. Place the brisket in the sauce, cover with the lid of the pan and place in the oven. Braise for 30 minutes. Reduce the heat to 300 degrees F and continue for braise for 3-4 hours.
6. Let the meat rest 15-30 minutes before slicing. Serve with sauce.
Posted by Cheryl Arkison at Sunday, January 30, 2011

Are we on the same wavelength? I just started cooking brisket myself. I always thought it was a challenging dish, but I use my cast iron braiser and it's dead easy.

I just use a simple smoked barbecue sauce, but this sounds intriguing. Just the sort of thing for a Sunday family dinner.

Nothing like a little physical activity to get the kids to eat some protein. Maybe I'll try this for our nxt soccer game.

nicely done. My two girls are three years and the other nine months. As a fellow foodies, I love the fact kids are eating brisket. Nice recipe to boot.

Im glad you enjoyed our organic brisket! We always love to hear our product is being appreciated :)