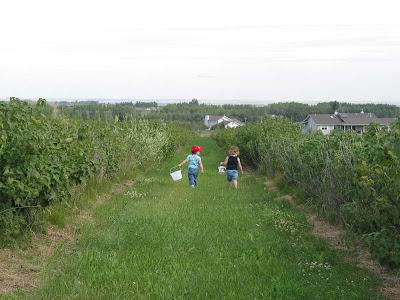 When travelling with a toddler it is important to note the difference between fruit farms and farms with animals. A few weeks ago a girlfriend and I saddled up all the girls (she has two as well) and went south to Okotoks for a morning at Kayben Farms. This was exciting for us moms, but a great let down for the Monster when she realized that, other than the black cat hanging out by the cash register, this farm did not have any animals.

That being said, the girls were troupers and worked up a good amount of excitement for berry picking. We were too late for strawberries but the black currants stood ready for us. The excitement lasted oh, about two minutes. At that point A (my friend's oldest) decided that black currants were gross and the Monster hated getting her arms scratched by the bushes. 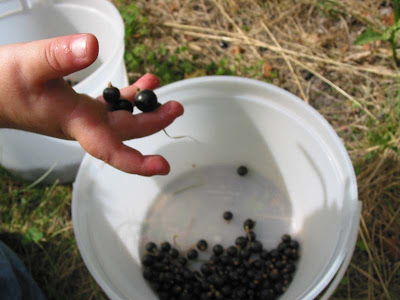 My girlfriend and I stuck to it - hell we weren't giving up without a fight and at least a half a bucket of black currants. We gave the girls snacks and sent them off to pick flowers/weeds. In between policing them and making sure the babies were happy we managed to get about a half bucket. By then the girls were done with the field. We headed back to the main building, drooled over flowers, and treated the girls to a black currant slush.

I headed home with all the black currants, armed with great intent to turn them into something. I'm not a fan of jelly, preferring jam. After boiling down the currants with some water and straining them overnight I was left with 10 cups of tart juice. What to do? What to do? To be honest, I couldn't decide so I just froze the juice.

After seeing Julie's post about blackcurrant sorbet and ginger ale floats and my current fixation with the ice cream maker I thought about ice cream or sorbet. My original thought was syrup, but I was having a hard time finding instructions or a recipe. Then I saw a show on Vermont and they, of course showed a sugar shack. Hmm, you make syrup by boiling the crap out of the sap. I decided that's what I would do with the black currant juice.

First I had to find bottles. A few trips to restaurant supply stores and Canadian Tire came up with nothing. Then my mother-in-law suggested a winemaking store. Jackpot! A dozen 375 mL bottles with plastic, reusable stoppers. 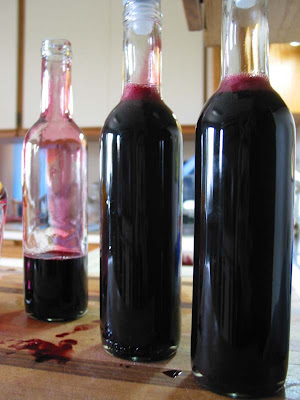 It turns out buying a dozen bottles was optimistic. My 10 cups of juice, after an hour of boiling, turned into about 900 mL of thick syrup. Well, not quite syrup yet. I added in 3 cups of brown sugar, a half cup at a time. It is still a bit tart, but I didn't want it sickingly sweet.

All that's left it to make pancakes for dinner and enjoy our labour.