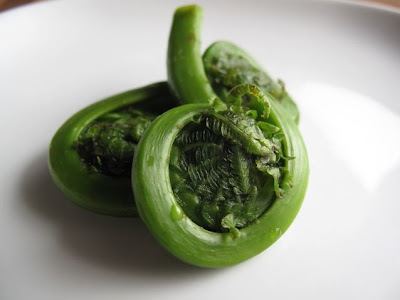 You know those moments when you speak out loud and you probably shouldn't?    Yeah, I had one of those on the weekend.  I'm fighting the crowds with the stroller (I am so one of those stroller people) at the Market, buying some groceries for the week when I see these tiny green spirals between shouts at The Monster to stay by me and making sure Smilosaurus is still buckled in.
"Ooh, fiddleheads!"  It was a moment when the world around you goes silent because you were ridiculously loud, even in a noisy crowd of shoppers.  Uh, sorry.
I first discovered fiddleheads when I lived in Halifax for university.  What was this precious green creature my friend's mom served at Easter dinner?  I'd never seen anything like it.  At that point I was still very picky and didn't eat much in the way of vegetables.  And I'd seen these things when hiking out at Crystal Crescent Beach.  They were edible?  Peer pressure did me in and I devoured the butter covered greenery.  Since that time I've only really had them a handful of times - I do live on the Prairies after all and these are not dry climate growers.
Did you know a fiddlehead is a fern that has just emerged from the ground?  Captured by foraging hands they grace our springtime plates like a harbinger of growth to come.  Steamed or sauteed lightly to be crisp tender they are really the taste of spring to me.  Not asparagus or lamb, but fiddleheads.  So when I saw them at the market I had to gasp, exclaim, and then sigh at the real end of winter (even if it really means the end of winter in BC).
The reviews were mixed in this house.  Smilosaurus will pretty much eat anything these days, but she really liked them. On Tuesday she finally put two and two together and signed "more" at dinner.  Last night she reverted back to a death grip on the high chair with a fixated stare on the food of choice and let loose with an intense growl.  Translation?  "More!"
The Monster is a little out of sorts with Daddy away so she was grumpy and not feeling very adventurous.  Heck, she didn't want her scrambled eggs.  I left them on her plate, forked and ready to go.  A little more grumbling and she decided to eat one.  Although she pronounced that she did not like fiddleheads, she did eat the rest on her plate.
Preparation of fiddleheads is very simple.  Clean them well under running water or swish them around a bowlful of water to remove any brown bits or dirt.  Trim the ends off.  I simply steam them for a couple of minutes, with a sprinkling of salt to retain the colour.  You can toss them with some butter at this point and eat.  But they are also great tossed in a vinaigrette or quickly sauteed with garlic and olive oil.  That is what I did today and finished it off with a some lemon zest.
I wonder how the girls at the market fared?  In my exclamations I convinced them to try the fiddleheads.  Maybe they were just trying to help me recover from my embarrassment?
Posted by Cheryl Arkison at Thursday, May 07, 2009

Those look like beautiful fiddleheads! I had them for the first time in New Brunswick, served with vinegar.

And then I tried to find them in Edmonton and they were outrageously expensive. :(

Joe and I got fiddleheads this weekend. We roasted ours with eggplant, garlic and tomatoes and served them over penne. Delicious!!

Good for you - I love it when I hear about parents who introduce interesting foods to their young kids. I always did and, whetheer it was a contributing factor or not, I have a 12 year old son who has a wonderfully diverse palate.

Gorgeous photo! I've never had them, and never seen them anywhere I could actually eat them - rats! Will get there sooner than later, sounds so good :)

i LOVE fiddleheads! in Japanese, we call them zenmai (cog-key) and eat them simmered in sweet and savory broth. I love the texture :)

I just made a fiddlehead quice. Simply puff pastry, eggs, garlic, parm and Gruyere and then covered the whole top of the quiche in a dazzling spectacular of fiddleheads.

I noticed some are peeking out in my yard. I just got another ten or so ferns for the front beds, so should have a solid crop next year!!

I keep looking at these in our backyard but I am not quite adventurous enough. I need to do some research and just do it!