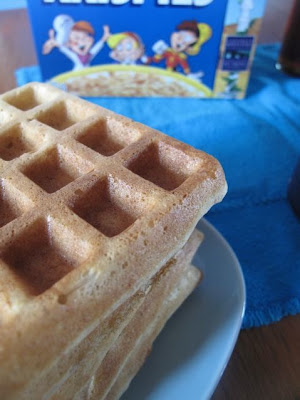 The very nature of a blog is part confessional.  It's time for me to 'fess up.  I've never been able to make Rice Krispie Squares.   Yup, the laziest, kid friendly treat and I've never been able to make them properly.   If you want rocks filled with rice cereal then I'm your girl.  That is, until last week.
My mom loves to make them for the grandkids and thus The Monster was asking for them.  It hurt a little, but only a little, to buy the marshmallows and boxed cereal.  I try to limit the processed food in the house, but I have to stop beating myself up for a few little treats. Besides, it is great dessert time fun for us to throw mini marshmallows across the table in an attempt to score one in a waiting, open mouth.
And ultimately, score one for this mom - I've finally mastered the Rice Krispie square.  My mom told me to add a bit more marshmallows than the recipe calls for and to take it off the heat as soon as those fluffy bits of corn syrup melt.  It worked.  Squares that stayed together but weren't like rocks.  Oh, and The Monster was happy.  So happy.  Such simple pleasures.
I'm all for treats and baking. I have no qualms with them having too much sugar, they actually self-regulate pretty well.  But I didn't want the cereal hanging around, constantly teasing her and inviting the ceaseless begging of a nearly three-year old.
Then I recalled a recipe that I saw from my favourite bow-tie wearing baldy, Christopher Kimball. Have I mentioned my geek crush on him before?  I'm sure I have.  He's so damn nerdy and cute. I digress.  I remembered America's Test Kitchen doing a bit on perfect, crispy waffles. Guess what the secret ingredient was?  Hell yeah, Rice Krispies!  A perfect use for the cereal.
The recipe uses cornstarch to help lighten the batter.  Whipping the egg whites separately is not a new notion in waffle recipes, but the combination of the cornstarch, whipped whites, and cereal makes a very light batter.  The cereal essentially melts, leaving pockets of crispy throughout the cooked waffle.  I've changed the recipe a bit, adding some whole wheat flour to make myself feel better.  And I prefer brown sugar for the extra flavour, but it works perfectly well with white sugar too.
We've now made the waffles a few times.  After so many attempts to find a light waffle that doesn't turn into a brick the second it comes out of the waffle iron I've finally found one. Seriously, these are crispy, light, and perfect for toaster leftovers.  I can make a batch on Sunday morning and the girls have a few breakfasts during the week. This is a great week for mom - dinnertime laughs, afternoon treats, and pre-made breakfasts.  And all from a box of cereal.
Perfect Waffles
(Adapted from America's Test Kitchen)
1 cup unbleached flour
1/4 cup whole wheat flour
1 cup Rice Krispie cereal
3/4 cup cornstarch
1/4 cup brown sugar
1 teaspoon baking powder
1/2 teaspoon baking soda
3/4 teaspoon salt
2 large eggs, separated
1 1/2 cups milk
1 teaspoon vanilla
1/2 cup canola oil
1.  Preheat a waffle iron.
2.  Mix dry ingredients together in a large bowl.  Whisk the egg yolks, milk, oil, and vanilla together in a medium bowl.
3.  Beat the egg whites with a wire whisk or electric mixer until soft peaks form.  Pour the wet ingredients into the dry. Stir until just combined.  Fold in the whites gently.  Do not overmix.
4. Cook according the instructions with your waffle maker.
Posted by Cheryl Arkison at Monday, June 08, 2009

The pic of the waffles with the cereal box kept drawing me in! I wasn't sure how the pic fit with the title with the treats and where, WHERE and HOW did the waffles fit in? The waffles look good and what a great idea to make ahead for fast toaster gratification.

Great recipe... I will definitely have to give it a try. I love that you can make a bunch and reheat the leftovers successfully!

Hah, cool idea. My hubby would flip if I made RC squares; I'm going to have to fold eventually!

Very interesting! That Kimball is smart and I agree, that is a very attractive trait!

Brilliant! I love watching ATK; like a Sunday afternoon ritual.

Yum, those waffles sound and look good. So do rice krispie squares right about now. I love making waffles too.