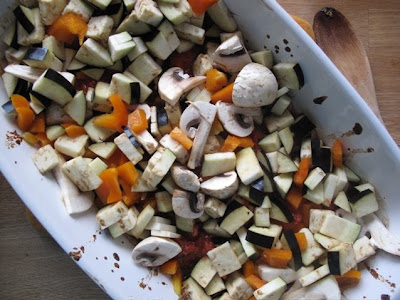 If the kid asks you what an eggplant is and in her prettiest voice ever asks you to buy it - pleeeease? - then you buy it. Then hope like hell she'll actually eat it.
Eggplant isn't something I tend to cook. Although I quite like it, Hubby hates it, so I often don't bother. But when The Monster spied it at the market a few weeks back and asked for it I jumped at the chance. Plus, Hubby was going to be out of town.
Because eggplant is not on the usual dinner repertoire in our house I stood there for a minute trying to decide what else I might need to make dinner. Along came Pierre.  Literally. He appeared and we started talking eggplant. After a few minutes we parted with promises of him sending me his recipe for ratatouille.
Pierre's recipe is a technique more than anything. When I make ratatouille I tend to chop up all my veggies, toss them with some olive oil, herbs, and a load of fresh tomatoes. Into the oven on high heat. And done. Pierre's technique was to chop up onion, cover them with canned tomatoes in a baking dish, and bake for a 10 minutes. Then top with eggplant and our other veggies. Throw in some rosemary and a secret ingredient or two and let it all bake together. I think the term he used was Blap! it together.
It was fantastic. I loved this method of cooking, I loved the ratatouille - rich, tummy warming, and flavourful. And the girls? Not so much.
The Monster refused to eat anything but the peppers, even after her one bite and reminder that this indeed was the eggplant she asked for. And Smilosaurus took this occasion to string together her first 4 word sentence, "I don't like that!"
Any other eggplant suggestions out there? I'm not willing to give up yet.
Posted by Cheryl Arkison at Tuesday, May 04, 2010

I like to slice eggplant thinly, lenghtwise, brush generously with olive oil and grill on the barbecue. You have to eat while it's still hot and crispy on the outside though, otherwise it gets mushy.

I really enjoy baba ganoush and eggplant casserole with multiple layers of slices of zuccini and eggplant, tomato sauce, cottage cheese and then finally topped with mozza. I also love the Greek lasagna recipe in a Moosewood cookbook that includes eggplant rounds as one of the layers.

I don't cook eggplant either! I made eggplant parmigiana once and it was delicious, but three out of four people in my house don't like it so I don't bother.

Baba Ganoush is always a safe bet, and so easy. I don't cook eggplant that often either but I always love eating it in stir-fries in thai restaurants, when it's silky-soft and sweet. I should learn how to cook it that way!

I've tried cooking it a couple of ways, and I wasn't overly impressed with either, but hubby downright hated them both. So I probably won't be making it anytime, unless some little munchkin (futuristically speaking here!) would beg for one.

One way I made it was in lasagna. I sliced the eggplant longways after peeling it, then fried each strip, then rolled them in cooked lasagna noodles with a really great pesto. I have since made the same recipe but using sauteed portobello mushrooms instead, to much greater reviews! :)

Well I'm certainly not goint to take it personally...
if the kids won't got for ratatouille it's time for the eggplant cacciatore, then try the Moussaka and if that doesn't work you'll have to invent eggplant ice cream.