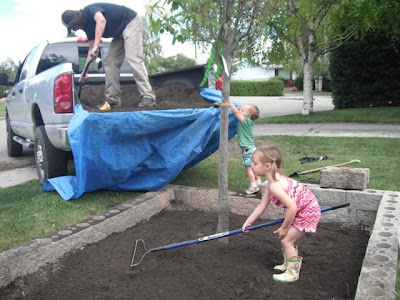 After a weekend of landscaping - well, a weekend of mostly providing snacks, lemonade, and advice while Hubby did some landscaping - I thought I should treat the man with a good dinner. Steak was too obvious. Then I remembered that our old summer ritual has been neglected since the girls arrived. Time to bring out the lobster.
Back story:
Hubby and I met 15 years ago. We started dating once I finished undergrad a year later. He came to visit me in Halifax. See, I was going to keep working at my organic vegetarian bakery cafe job and save money to go to Europe. Then he decided to visit. After spending a week driving around Nova Scotia, eating lobster along the way, I knew there was no way I would get to Europe.
So, a few days after he left and more than a few boxes of Kleenex later I booked myself a plane ticket West, packed up all my University belongings, and called him. We chatted for a bit, then I asked him what he was doing the next night. When he replied that he had nothing going on I suggested me might want to pick me up at the airport. Like a good man he asked why I was coming to Edmonton. And like a brave, slightly stupid 21 year old I simply answered, "You." 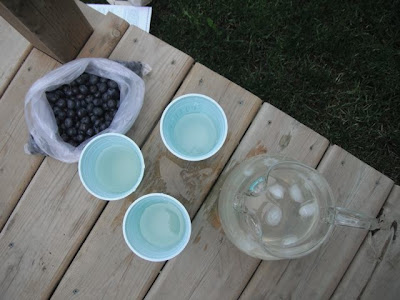 One plane ride, a short soap opera, 14 years, and 2 kids later I still say it was the dumbest and best thing I ever did.
And every summer since we've treated ourselves to a lobster dinner. Indeed, this is more of an anniversary than our actual wedding anniversary. Tonight we brought the girls into our tradition.
That may have been a very, very bad idea. The Monster was all excited to buy the lobsters with me, happily carrying them and showing them off to Daddy. The girls are quite fascinated with the lobsters at the market and are wickedly curious about them. This fact alone could not prepare me for the abject terror Smilosaurus had when actually face to face with a lobster.
I should have been sympathetic to her tears, but I was only reminded of her Dad, on that first trip to Nova Scotia. The last night of his visit we decided to buy lobsters and cook them at home. I pulled them out of the box and held them out for Hubby to inspect. The guy seriously jumped and ran away, screaming, "Get it away! Get it away!" I, being the little snot that I am, then chased him with the lobsters while he threw anything available in my direction. And that was the week I discovered about the only thing Hubby is afraid of - live lobsters (he blames his mother). All I could do was giggle with memory as my baby girl cried and cowered in fear.
Yes, I'm still a little snot. 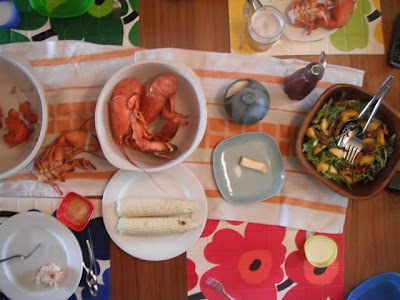 We thought everything would be fine once the lobsters were cooked. I steamed them (do not ever boil your lobsters) for about 12 minutes. The same amount of time the corn was on the grill. I made a salad of green and baby beets from our CSA delivery, with some peaches, basil, and toasted pecans. We sat down to eat and the terror re-emerged. She couldn't stop screaming. Even when we told her she didn't have to have any and that the lobsters were dead. Terrified was the word of dinner.
Rather than have her tears destroy what should have been a fantastic dinner we put her in her bed and let her read books while the rest of us ate a very lovely, yummy meal. She joined us for a bit of corn and salad. Lucky girl, because then it meant she was allowed dessert. And that was worth setting the fear aside. Ice cream sandwiches made with this lime ice cream and Digestive biscuits.
Oh, I guess I should clarify that Hubby is no longer afraid of live lobsters, but he would still prefer I don't hold them anywhere near him. 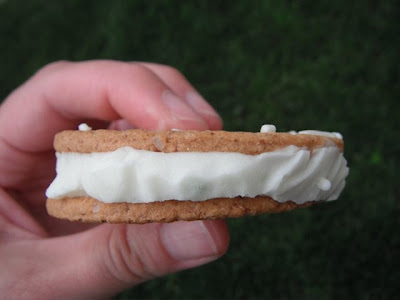 i shouldn't read these posts so late at night...sounds yummy...we enjoyed our NS lobsters last summer...yummy

Cheryl, what are you making, in the landscaping department? Or are they just burying the lobster shells!

Lime ice cream? Oooh. You can chase me with a carton of that any time. I won't throw anything at you, except perhaps a spoon.

Funny post! It's a good thing that our family doesn't eat bugs (my fear) or rodents (yeah, another one) because that's my fear. I've heard that other cultures do, and that's fine for them, but...no thank you!

what a good story--I've got one like that, too--the best & stupidest thing I've ever done. seems to have worked out pretty well for ya'll :)

Lovely story! Sniff. Now I want some lobster. And a new boyfriend.

I'm also into the food blog world, and it would be great if you can take a look at my site and leave me any comment/suggestion.