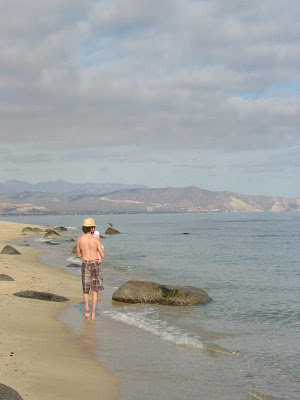 We’ve returned from our two weeks in Baja. The East Cape area is not Cabo – thankfully. It’s not really a place for tourists, either. Rather, it is home to a few small towns and farms hanging on the edge of the Sierra de la Laguna mountains and desert, desert, desert leading straight into the ocean surf. Other than the locals it is filled with sportfishers, rich Americans, and a few divers. Along with my entire family we rented the home of one of the Americans. This meant we could cook on our own instead of relying on taquerias and the few restaurants around (but those were good too). It also meant I could make many, many lime pies.
Aside from a lot of time spent walking the beach looking for shells and sea glass or swimming there wasn’t much to do. We drove around on the rally certified sand roads and sketchy Highway 1, visiting nearby towns and the hidden gems we could hike to. Mostly we played with all the kids (5 kids under the age of six), tried to read, and ate and drank - a lot. We took turns cooking and making the margaritas. There is actually quite a bit about our trip that I want to share. Today I will focus on the limes. 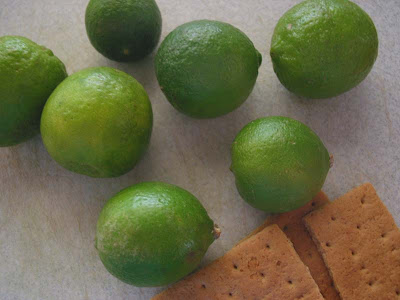 Limons: tiny green orbs of tart, sweet sunshine. In Baja they called them limons; they looked like key limes to us. Fantastic in a margarita, but irresistible in a lime pie. We saw the limes in the supermercado and bought a dozen every day or two.
So began the hunt for the rest of the ingredients for the pie. Generally this involved trying to pretend to read Spanish labels and hoping someone had heavy cream or graham crackers. Eggs, no problema. Zuca (sugar) no problema, Leche Light (condensed milk) no problema. Graham crackers were a challenge. I had settled on using some other random cookie to make crumbs when my mom hit another mercado and found some graham crackers. Heavy cream was never found, delivery of dairy products random in that area.
We were lucky that the kitchen in our house was relatively well-stocked. After the first pie I found the citrus juicer. Phew, that saved my fingers and a fork a long time spent juicing those teeny limes. And while there was no fancy microplane rasp, I did have a choice of zesters. I am pretty sure that it wouldn’t take as long to make the pie here, with access to pre-made crumbs or at least a food processor that works. We did miss the whipped cream accompaniment, but we survived. Yeah, it was pretty rough. In total I think I made 4 pies. I think the recipe may have come from Martha, but I've made it for so long that I can't remember. Each one gave us the emotional equivalent of a sigh after the kids were all in bed. And for myself and my sister-in-law, it also gave us breakfast a few times, strength to fortify us for the swimming, tantrums, and innumerable sandwiches we tackled every day with the kids.
Now that we are home I intend to make this again this weekend. We are having the neighbours over for a thank-you dinner. They did shovel the walks and bring in the mail, after all. The least I can do is feed them pie, with whipped cream.

Oh, I dearly LOVE key lime pies. I can only make them in summer with real limes here in MI. It makes me want to go there just for the citrus!

Worth trying this recipe? My last serious cooking disaster involved a key lime pie. I am convinced there is something seriously different about Australian gelatin (my recipe called for it).

I made this for the first time a couple days ago with my sons. It was so good. My husband was very impressed; kept asking what was in it and how I made it. Apparently he felt it was better than the one he made, which was so long ago that I almost forgot he had made one.

Thanks for the recipe!