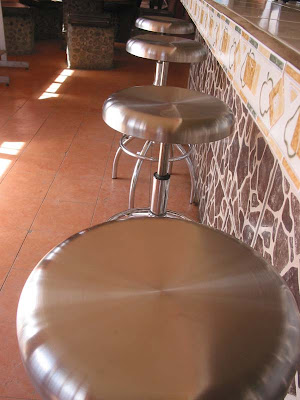 If Jane and Michael Stern ever went down to Baja they would look for the place advertising local cheese and selling their homemade sweets, then stop at every place within walking distance to check them out as well. We found El Oasis in our guide book, but could have happliy eaten at the Tienda across the street or the other two restaurants down the road.


El Oasis is a fitting name for its location. Up in the Sierra la Laguna moutains the town of San Bartolo is a respite from the sandy haze of the Baja desert and the ocean winds. Lush and filled with wildly blooming flowers, citrus, and appropriately for the season, pointsettas San Bartolo promised a view and some tasty road food. Oh how it lived up to its promises. 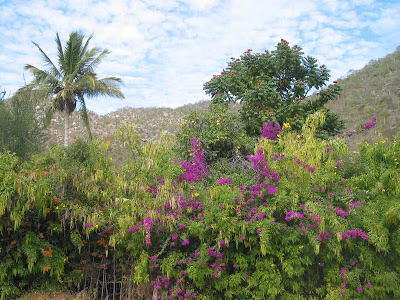 We were travelling with some slightly less adventurous eaters; adventurous in tastes, not necessarily in locale. I think my family was nervous at first, stopping at essentially a diner in the middle of Mexico. Inside it was filled with dulces, empanadas, and the cleanest kitchen serving tamales, tacos, and fiery salsa. All fears were allayed with the hairnets. And tastebuds were alive with the olfactory tease of broiling pepppers.

We ate the best tamales any of us have ever had - and my mom used to live along the Texas/Mexico border, accompanied by the purest salsa ever. Broiled jalapenos and tomatoes, put through a grinder. That's it. Nothing else. Heat, sweetness, and the taste of the mountain sun. 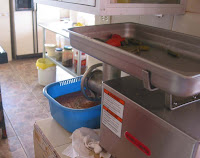 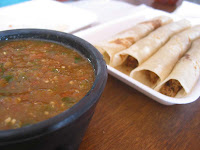 Fortified for the day we drank our cervesas and iced teas in the mountain breezes while the neighbourhood chickens serenaded us. Onward for a drive. Not without a dozen tamales wrapped in a plastic bag and some salsa for snacks upon the return to the beach house.

One of our other Baja road trips took us to the Sierra la Laguna Biosphere Reserve. We drove through Santiago, decorated for Christmas with a more than life size nativity scene in the town square and out of place snowmen lights. Beyond the fields of palms and down more sandy roads we paid our entrance fee to the reserve. A small parking lot with a surprisingly stylish looking outhouse marked the entrance to the trail down to a freshwater oasis.
When the guidebook said a short ten minute hike it neglected to mention that it was narrow, phenomenally rocky, and not suited to fancy jogging strollers,people with bad knees, or hot toddlers. With the stroller parked and the kids and Baba assisted we arrived at the waterfall.
It wasn't a palm tree and pond in the middle of the dessert, it was better. A 30 foot waterfall plunging into a dark pool of freshwater, surrounded by granite, grass, and cool air. Impatiently we got the kids and ourselves into bathing suits (this isn't a place for modesty). Only my brother and Hubby were brave enough to climb the rocks to the top of the waterfall and jump. It proved to be a dangerous mistake for my brother after he slipped on the wet granite. Thankfully it ended well, albeit in a badly bruised back. For the rest of us we savoured the fresh water and dust-free hours. 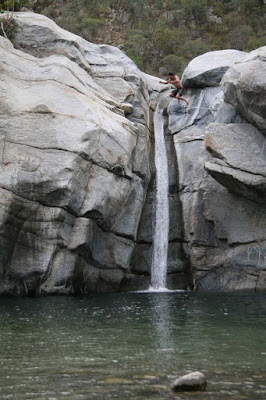 When it was time to return we stopped in Santiago. No restaurants around the plaza, but a few tiendas to choose from. We'd hoped to luck into some ice cream for the kids. Note to self, be cautious when opening unmarked freezers in small Mexican towns. Ice cream? No. Freshly butchered meat, unwrapped and still smelling bloody? Yes. All was made better when we found what we thought was fresh yoghurt in a front cooler. Marked with Christmas colours and covered tightly with foil we grabbed a few for the kids and headed to the plaza to munch. Okay, so it was probably packaged Jello with some milk, but it was fantastic to us and the Monster. 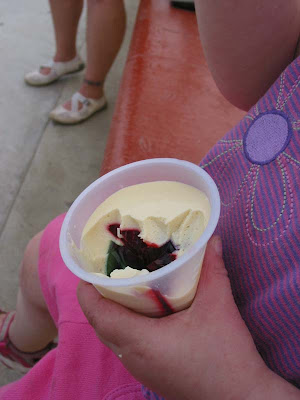 There were more good meals to be found along the road. Small beachfront palapas with amazingly sweet shrimp tacos and cold beer, gas stations with fiery burritos and soft sandwiches, and even a bakery making tender gingerbread cookies.
Some people told us to be afraid of the road food - will it be clean? what about the water? We had no fear and were rewarded greatly. Indeed, I would say it was some of the best food we ate there. I can still taste the salsa and Hubby wants more of those burittos. Next time, in the Airstream for sure.
Posted by Cheryl Arkison at Tuesday, January 06, 2009

you have a very interesting blog. I am currently reading Two for the Road book of the Sterns i got at a booksale here in the Philippines.

how can i be a follower of your blog? I have a food blog too,
www.pritongmanok.blogspot.com