Too Lazy to Cook 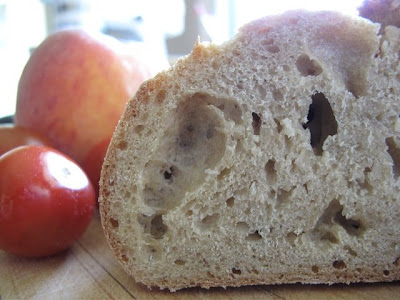 It isn't too hot. There is no family crisis. And we aren't being pulled in ten million directions.
Nope. It's just a week filled with dogs using beds and carpets as bathrooms, teething babies, whining and sniveling Monsters, taking care of the neighbours' incredible barfing cat, and a miserable time at work. So no, I don't feel like cooking.
Last night we went out. Yeah, that was a mistake. The girls are normally great in a restaurant, but last night they were not. So rather than resort to true laziness and simply boiling water for pasta I pulled out some leftover bread from Aviv. A quick survey of the counter and fridge revealed the rest of the ingredients for dinner: tomatoes, peaches, and some mallow and green onions from last week's CSA delivery. 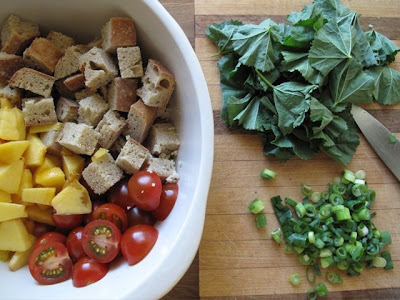 Yup, when you are too lazy to cook you can still have a damn tasty meal. Just 10 minutes of chopping and a quick drizzle of oil and vinegar and you've got panzanella. For us non-italians, that means bread salad. 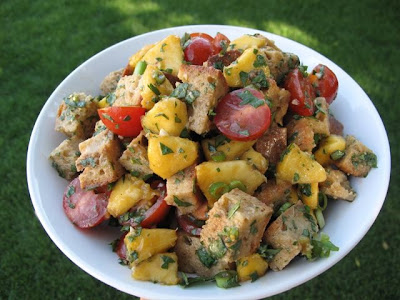 This is a technique more so than a recipe. I've never made this without tomatoes, but the rest of it depends on what herbs and other veggies I have around. Sometimes cucumber and red onions. Sometimes coriander and roast peppers. And today, peaches, mallow, and green onions.
Basic Panzanella
serves 1-4, or more
1/2 to 1 loaf of day old crusty bread
1 pint cherry tomatoes or two to three tomatoes, chopped
peaches, cucumbers, onions, peppers, or veg of choice - a couple of chopped handfuls
1-2 cloves garlic, finely chopped
2-3 tablespoons of fresh herbs - basil, mint, oregano, mallow
olive oil
balsamic vinegar
1. Tear or cut your bread into rough 1 inch pieces.
2. Place bread in a bowl, add tomatoes and remaining ingredients of choice. Add garlic and herbs.
3. Drizzle generously with olive oil and vinegar. Season generously and eat. 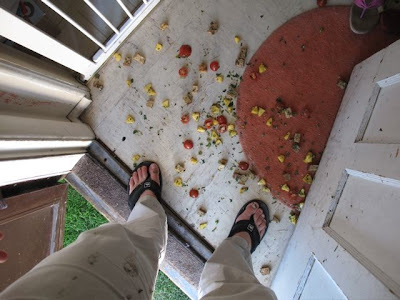 Oh, and in case you thought that even this dinner was immune to the daily frustrations of life these days this was half of dinner, before we even started. I was coming inside after taking a few pictures and the dog jumped up, knocking the bowl from my hand. Sigh.
Posted by Cheryl Arkison at Wednesday, August 19, 2009

Cheryl, you have been hanging out at my blog too long. This whole salad-dropping, pant-splattering approach to meals is MY bailiwick -- only I trip over the cat or someone's running shoes.

Thumbs up to Christie's comment and thanks for the din din idea. I can always use those. Your legs are looking nice, might I add. Who needs to mountain bike to have nice legs... apparently quilting does the trick too! Have a great day, friend!

I'm glad I'm not the only one with a dirtbag doggie.. In my case it was my pint of beer. Not cool, not cool at all.
I really must get on that bread delivery service.. and do you have a contact for the egg guy? Great post..

Oh no! But the salad looked lovely, nonetheless. Isn't it funny how life is sometimes thrown at you - a decades worth of mishaps in one day?

Hope your week picks up!

I've seen this recipe here and there and I keep forgetting how much I want to try it! Yum!

That just stinks when your dog makes you spill you food! ;0(

Ugh! You must have been wanting to strangle your dog! I hope he wasn't allowed to clean up the mess as his punishment haha!

you've totally decided what my Tuesday night dinner will be. that's Farmer's market day, & I've got some leftover ciabatta, so.....viola! hopefully mine won't get on the floor, but I'm not making any promises.