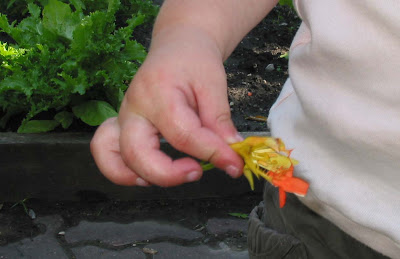 When a whole bunch of foodies get together in a spectacular location for some yummy, locally produced and cooked food it is a recipe for a hot afternoon. When a couple with two young daughters go to that event it is a recipe for a sweaty, busy afternoon spent chasing, cajoling, and sometimes eating.

The family went to Slow Food Calgary's Seventh Annual Feast of the Fields on Sunday. There were local restaurants cooking food sourced from a number of local producers. The food was great, the music was fun, the location was fantastic. The Monster was mostly whiny and picky and the baby was fussy. I think it was a day for the babysitter...

Slow Food Calgary is devoted to the protection and promotion of regional cuisines, ingredients, and local purveyors. At Feast of the Fields a number of local restaurants teamed up with local producers to showcase ingredients, taste, and talent found here.

Hubby and I were looking forward to the day. It had been a tough week for both of us and the promise of good food and a day out kept our spirits up. When Sunday bloomed into a gorgeous Indian Summer day and the girls napped well beforehand we thought we were set. You could smell the grills as you approached the garden at Rouge, starting us salivating. 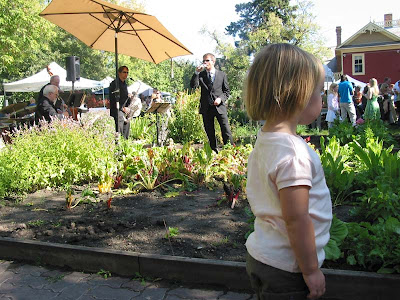 Unfortunately, the Monster was not in the mood for a garden party, asking us for a tea party at a friend's house instead. She was temporarily placated by some lemon water when we got there. And until we found some bacon on one of the specially prepared treats she wanted nothing to do with the food. Hubby and I busily gorged ourselves on everything she wouldn't eat, and then some. Tomatoe and bacon soup, duck proscuitto, blackcurrant and yoghurt tartletts, and more.

Then we found ourselves a spot in the shade, with a good view of the garden and the band. The Monster found some other kids - including ones in the best t-shirts with the slogan "Slow Eater" on them. And when Jessica Beacock, one of the chefs from Rouge, came out to harvest some nasturtiums from the garden the kids flocked to her. She gave them a lesson in edible greens and even let them pick some flowers to taste. The Monster liked the peppery taste so much she helped herself again. 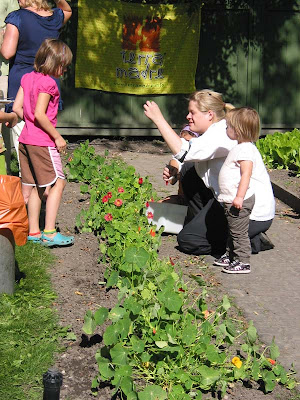 At the end of the day Hubby and agreed on two things. One, it appears that you need money to be a foodie in this city. While I won't discount the importance of an organization like Slow Food, the event wasn't cheap. And it seemed that a lot of people there weren't afraid to show off that they have money. There isn't anything wrong with that, but it makes me wonder about the rest of the world. Good food isn't only for the rich, but I'll save that tirade for another day.

And two, as much as we want to expose the girls to local producers and new tastes, we would have had a better time if we'd gone by ourselves. Sure, there were lots of kids around and we believe it is important to introduce the concepts of Slow Food, but it might be better to wait until she is a bit older to appreciate an event like this. Or maybe we just wanted a date.

What an enjoyable blog. I have one very simular; mine includes food and raising boys! Great job.
Thanks for sharing.

Interesting post. I know very little about the Slow Food movement, but it does seem to have it's nose up in the air. Hmm, must investigate this.
Looks like a great time!