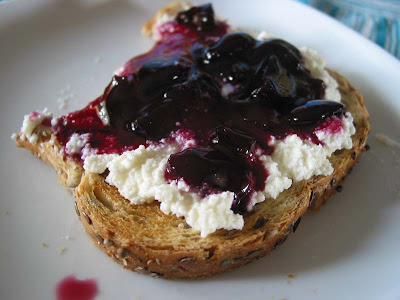 There is that moment in time that every parent dreads in the development of their toddler - the Mine! stage. When the fork you are using, when the book you are reading, when the toy the other little girl is playing with, or when the quilt on the bed is always "Mine!" to your kid. It's exhausting to chase them arround attempting to extol the virtues of sharing or explaining that other people need those things to eat, mow their lawn, or move. It's infuriating when they can't grasp it, even though we should know better and realize an 18 month old doesn't necessarily know any better themself. So we follow behind them, chastising them as much as we can and apologizing profusely to the man whose cane she tried to steal or the little boy whose cookie she took.

I will not, however, apologize for my upcoming bit of selfishness. You see, I am painfully addicted to my cherry jam. Rather, to cherry jam with ricotta on toast. I could eat this every day, two or three times a day. The only thing that stops me from doing this is supply.

Sure, you can get cherry jam in the store. Most of it is imported from Europe and is quite chunky and thick. I find it all rather cloying, but it will work in a pinch. This summer I was inspired and decided to make my own. So far I've made three batches and I still worry whether there will be enough to get me to the next cherry season.

Making the jam, while time-consuming - was actually quite easy. I even decided to try it without using the pre-made pectin. I thought I was rather brave, having used Certo my entire life. With a little bit of searching I came across a post by the ice cream guru David Lebovitz. It was all coming together.

Following his basic directions I pitted all my cherries (with my paring knife), cooked them down a little, measured, then added sugar and boiled away. Then I put them in my specially bought jars. (Smart me bought new jars of a different shape for all my cherry jam. That way there can be no mistake between the cherry I love and the strawberry for the Monster and raspberry for Hubby.) A half hour later I realized that the jam was not going to set. So I emptied the jars back into the La Creuset, quartered an apple for some added pectin, and boiled again. Success this time. So I tried again with cherries and peaches. Yesterday I decided that I didn't have enough in the pantry and made another batch of plain cherry.

Instead of rationing my supply, I will enjoy it all. The Monster and Hubby will not. They are not allowed to touch my cherry jam. And yes, I will have a temper tantrum if I see their fingers or spoons even in the vicinity of my cherry jam. Maybe the Monster will shake her finger at me and tell me to share, and maybe I will. Likely I won't. It is all mine, mine mine.
Posted by Cheryl Arkison at Friday, September 05, 2008

OH YUM.
Have you made your own riccotta? It's on my to-do list, and moving up the ranks fast. Apparently it's super easy.
There's a place in the Shushwap where you can buy a membership to a cherry farm and own your own tree, then go and harvest 40-70 pounds of fruit once a season...