A Breakfast of Memories 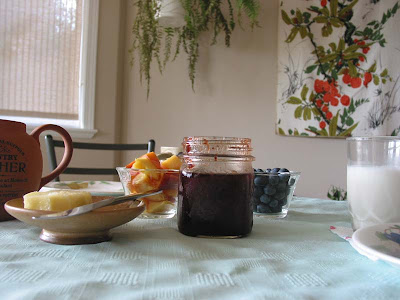 When people leave it is often the simplest things that you miss. Yes, they may have been war veterans, strong supporters of community service, or the most mischievious senior citizen you've ever met. But it is the rituals of hospitality, the conversations over greek salad and gin & tonic, and the breakfasts that you miss.
Hubby's Grandpa passed away last week and we were in Kelowna on the weekend for his funeral. Only a short 18 months after Grandma passed away we had to say goodbye to another kind, loving soul.
When I arrived in my husband's life he spoke fondly of his grandparents, their home in the Okanagan, and the sheer kindness of these two important people. The first time I met them they welcomed me with a shot of frozen vodka and a debate about the perfect martini. The first morning in their home came early - I was sleeping alone because Hubby and I were only dating and still young - but Grandpa was already up.
Every single morning Grandpa would be the first one up to ready breakfast. He would grind coffee beans and boil water to make coffee. He would set out plum or strawberry jam, the bread, and cereal. The table would be set for all of us, Hubby included, even though he never eats breakfast. Sleeping in wasn't an option, but mornings were never too early. Every setting would have a tiny juice glass and a mug for coffee. And always on the table was the English crockery jug filled with milk, frosting with the cold liquid in the morning sun.
As my relationship with Hubby deepened and we eventually married we made at least two trips a year to visit Grandma and Grandpa. We shared meals on the deck, happy hour, one particularly stressful trip where our car was rebuilt in the car port, and road trips to local foodie haunts. But I always welcomed breakfast there more than any other place in my life. From the giant kitchen in their retirement home to the bright kitchen of their final home, I would sip my tea while the rest drank coffee and we would talk and nibble for hours. I would tease them about those tiny juice glasses. We would discuss business and politics and history. Hubby and I would get lectures about when we were going to first, get married, and then, have kids. When the coffee ran out we would plan our daily adventures and clean up, only to get ready for lunch.
Breakfast will never be the same. 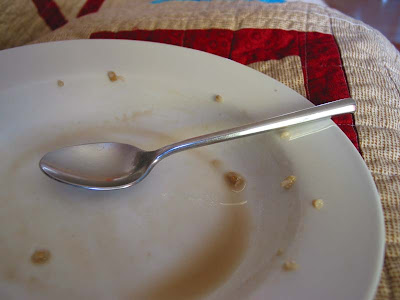 At the funeral one of their granddaughters spoke about her relationship with her Grandpa. She brought up something that struck home for me, in particular. Grandpa was the person who taught me how to make oatmeal - porridge, as he called it. I grew up on Cream of Wheat, but that's it. Other than some packets of instant oatmeal I'd never had the real thing until last year. When C discussed her Grandpa she reminisced about how she was forced to eat oatmeal as a kid and the shock in Grandpa when she started requesting it as she grew older. It may only be porridge, but we can always learn from those before us.
Grandpa showed me that the perfect bowl of oatmeal starts with simmering water and a generous pinch of salt. Put in half the amount of oats as water and cook ever so slowly to bring out the creaminess of the oats. Don't rush it, even if you are using the quick cooking oats. I've evolved a little and both the Monster and I enjoy our steel cut oats with some brown sugar, milk, and a little fruit.
We returned home late on Sunday and today I am quite sick. But the baby needs to be fed, which means I need to eat. Oatmeal seemed perfect. I sat, buried under a quilt with one baby napping and the other at daycare and thought of some pretty amazing people while I ate my soulful breakfast. 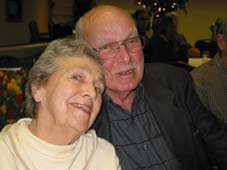 Ha. My next post in the works is about my standard breakfast of oatmeal.

What a lovely post. My condolences to your husband and his family.

You made the preggo lady cry at work. Very sweet!

What a sweet story! I think its incredible how food is such a memory trigger for most people. I know I definitely find comfort in foods that remind me of happy times!

What great memories to have.

I'm not a breakfast person and yet I love to see the table laid for breakfast. I could picture exactly how the table looked from how you described it.