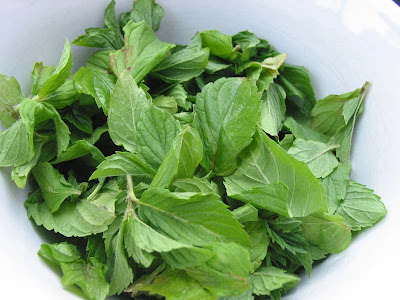 I'm sure at one point in history, perhaps after the invention of the ice cream maker, that headlines around the world screamed the truth about ice cream. It really can cure all, at least for the ten or twenty minutes it takes to let the seduction and relief to melt on your tongue. Profound sadness, a hot day, cramps, or even the celebration of a day well done - all are made better by ice cream.

In an effort to clean out the garden before this week's frosts set in I picked all the mint. Planted in anticipation of never made summer mojitos there was a lot of mint. A perfect opportunity to make Hubby's favourite, mint chocolate chip ice cream. I found what seemed to be a straighforward recipe, went shopping for chocolate, and patiently made my ice cream. 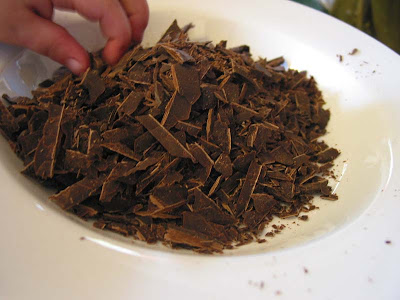 I say patiently made my ice cream because during this process I learned a few more lessons in ice cream making.

Fifth lesson in ice cream making: Make the custard or whatever base you are using the day before. I steeped the mint leaves in the cream on one afternoon, made the custard after the babes were in bed, and after covering with plastic wrap, refrigerated the custard until the following afternoon. A really cold base means the ice cream freezes faster and there are less ice crystals. In other words, creamier ice cream.

Sixth lesson in ice cream making: When you are putting the ice cream in a container to harden, place plastic wrap directly on top of the ice cream. This too reduces ice crystals = creamier creamy ice cream. 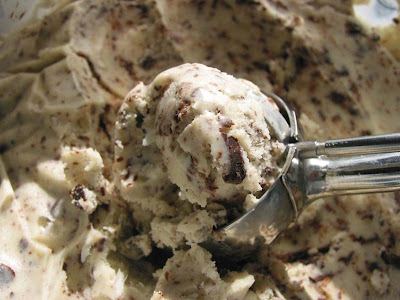 I tried to follow the recipe exactly, hoping for good direction. Unfortunately, I had less mint than they called for and not enough half and half. But I am tremendously happy with the way I did things. The only thing I would change is to use less chocolate, yes, less chocolate. Just an ounce or so. When you are chopping it yourself you get lots of little pieces that, at times, overpowered the ice cream. I would also halve the recipe. This nearly overwhelmed my ice cream maker. It makes a good amount of ice cream, more than this family needs sitting around in the freezer.

1 1/2 cups fresh mint leaves, washed
2 cups half and half cream
1 cup whipping cream
1 cup milk
1 cup sugar
Pinch of salt
4 egg yolks
1 tsp vanilla
5-6 ounces chopped semi-sweet chocolate
1. Bruise the mint leaves with a mortar and pestle, or simply the butt end of a wooden spoon, until you can really smell the mint.
2. Whisk the creams, milk, sugar, and salt together. Toss in the mint leaves and heat until hot, but not boiling or simmering. Cover and remove from heat. Let sit for an hour or more. Refrigerate after a few hours if you are not making the custard right away.
3. Strain the mint leaves from the cream base. Heat to a simmer.
4. Whisk the egg yolks. Add about a cup of the cream to the yolks, whisking vigourously. Then stir the egg mixture into the cream. Continue to cook, whisking continously, until the custard is thick. Stir in the vanilla.
5. Strain the custard into a clean bowl. Place plastic wrap directly on the surface on the custard and refrigerate a few hours or over night.
6. When the custard is cold, make ice cream according to your appliance's directions.
7. Chop chocolate. Add chocolate to the ice cream maker just before your ice cream is done. Pour into a container and place in the freezer to harden for a few hours before enjoying.

ok - yum! I'm so glad you left a comment on my blog, so I could get linked to both of your blogs! love the names of both and the content. I'll be a regular lurker for sure.

Good tip about covering the ice cream with plastic wrap and not just the lid of the container. I bet this would help keep any ice cream that you'd been serving from fresher, longer.

Please bring this recipe and the machine this weekend!!!!!!