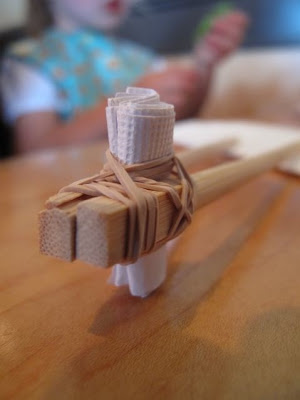 We have Revenue Canada to thank for our day.  Yeah, I just said thanks to the taxman.  Due to ignorance on either my part or theirs (I'm going with the latter, of course) I had to make an unplanned trip downtown to the federal government building.  For those of you that don't know Calgary, said building is located smack-dab next to Chinatown.  How could I not take advantage of that?
It was perfect too since we were on a chopstick mission this week.  For The Monster's birthday dinner (on the day of) she chose sushi. After the forced affection and delivery of our Pocky and the carved orange we set down to eat.  The girls had pieces of sashimi and a pile of edamame.
All was well until she got frustrated with the chopsticks.  It was not dissimilar to her attempts to ride the tricycle.  If she can do it easily all is well the world.  Rainbows appear and choirs appear to be singing just for her.  But if it is even the tiniest bit difficult then the thunderheads arrive instantaneously and she throws aside her pride and her effort to pout.  Oh yeah, we're going to have fun with her in life.
So it was with the chopsticks.  She tried them the way Hubby showed her.  No luck.  She tried the way she thought they should work.  Nope.  So she flounced back in her chair, ignoring even the edamame, and pouted.  Crossing our fingers we asked if they had kid-friendly chopsticks. MacGyver would have been proud of these take-out chopsticks configured with an elastic band and bit of paper towel.  And a chopsticks superstar was born. 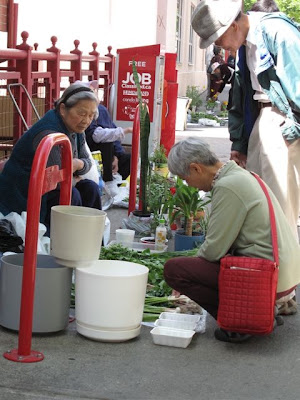 So, thanks to Revenue Canada she and I found ourselves in Chinatown this morning (Smilosaurus was napping and Hubby working from home).  Sheesh, it's been a while since I wandered through this part of town.  We went into some groceries, a meat place, a bakery (steamed pork buns and pineapple cake!), and even a store selling Chinese medicines.  She walked around asking, "What's that?  And that?  And that, that, that, that?"  Of course, being the white girl with no real knowledge of Chinese I couldn't answer her most of the time.
Her natural curiosity  - I wonder where she got that? - carried her through just fine.  It was funny to me that the crowds, new smells and sights, and people selling on the street were just fine to her, but the bustle and noise of the traffic on the main roads of downtown actually terrified her. She had an abject fear that a truck would run her over.  Sure, she can randomly run into the basement of a strange building because it has a funky ramp, but a dump trunk is going to jump the curb and squish her.  Is that just a three year old thing? 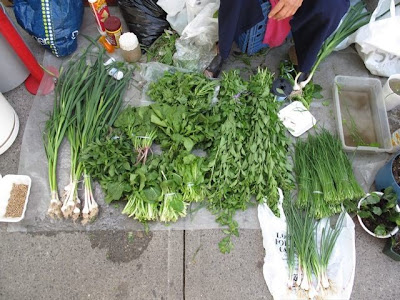 I loved chatting with the little old ladies selling plants and fresh onion, herbs, and garlic on the street.  They reminded me of my Baba in the worst way - if my Baba ever lived in a big city and thought to sell anything from her over-sized garden.  They were tiny, full of smiles, a little bit pushy, yet meek and quiet.  On plastic sheets in front of them they sold stuff picked from their gardens.  Wait, I'm assuming that last part because their English wasn't great.  But I want to think that they picked the stuff that morning from their backyard and brought it downtown to sell.
You can only just make it out above, but they also had a variety of houseplants for sale - in pots, plastic tubs, or margarine containers.  It was like they transported their houseplants to the street to share with everyone.  If I liked houseplants I definitely would buy from them. 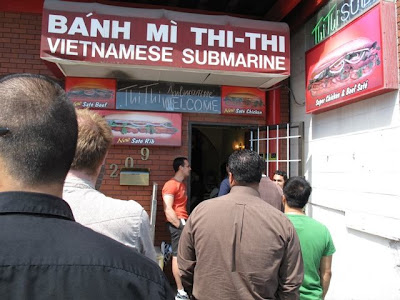 You could eat all day in Chinatown and not even scratch the surface of possibilities.  I would love to take the girls to Dim Sum.  I think it's been twenty years since even I've been.  Honestly, I think need a tour guide to make sure I appreciate what I see around me - on the street and on the plate.  Maybe I should sign up for one of these?
That being said, I knew this place and couldn't resist taking lunch home for Hubby. Oh, the Thi Thi sub... excuse me while I mop my forehead from the heat and wipe the drool from the side of my mouth.  Sadly, the girls stuck to their steamed buns while Hubby and I sweated over our subs.  Yeah, thanks again taxman.
Posted by Cheryl Arkison at Friday, June 19, 2009

Pocky and a carved orange! You went to Kinjo's for the Monster's birthday, didn't you? Peter Kinjo is such a sweet, sweet man.

Glad to see you both had fun in Chinatown too :)

I love the MacGyver chopsticks! I am definitely trying that next time we eat Asian; I have been on the hunt for those kids' mini tongs/chopsticks, but no luck so far.